There is a long tradition of lawn sales in Alice Springs. In the US we called them garage sales. Either way, it’s a way of moving along items you no longer want or use so that they find new homes, and so your home is less cluttered…or has more space for new stuff, depending on your motivations. My reason for decluttering is because I have discovered I function better, and more peacefully, with less stuff to have to store, clean, use, wear, whatever. I’ve never been a hoarder or even much of a collector. I am too much like my paternal Grandmother for that. My first serious divesting of goods was over three years ago. It felt wonderful to have space in the cupboards and drawers, but I realised how difficult it is to responsibly dispose of things you no longer require. The process made me respect the act of acquiring new things much more deeply. In addition, we also have the concern of waste in the world, and how to dispose of things properly and conscientiously.

Lawn sales, a solid tradition here, are both sociable as well as practical. Some even find them fun, which they are—on the day. However, the sorting, pricing and organising preparations are more like punishment. That part can be made more fun with friends to help, but ultimately you just have to make the decisions yourself. Recently a good friend and I had a ‘team sale’ where we put things together so that it would have a larger presentation. I didn’t have nearly as much as the one a couple of years ago, because I have been pretty careful not to accumulate things again. What I had realised, however, was the first culling uncovers things that later on you can see you should have let go of as well. Hence the most recent cull and gathering of things.

There is such an eclectic selection of things people put into lawn sales; things you have never even heard of or seen before, but suddenly yearn to own at that bargain price! There was a humorous documentary made in 1996 about the culture of lawn sales in Alice Springs. It is called ‘The Search for the Shell Encrusted Toilet Seat’. I saw it on TV all those years ago and have searched for it to watch again but have not found it. It was clever and quirky and I think surely it will find a place on YouTube or somewhere one of these days. It tells the story of someone who saw a toilet seat with sea shells ‘suspended’ in acrylic for decorative effect. If you have ever sat on one, which I have because my former mother-in-law had one, you would know they are most disconcerting. You feel like your bottom will certainly come off the worse for the experience, but in fact no lacerations were caused in the use of that seat. There are some things in life we really don’t need to experience. The fellow in the documentary prevaricates and doesn’t purchase the shell encrusted toilet seat when he first sees it. He later regrets it. But where was it he saw it? At which lawn sale of dozens had he seen it? Thus begins his search to retrace his steps through Alice’s interesting lawn sales and characters. 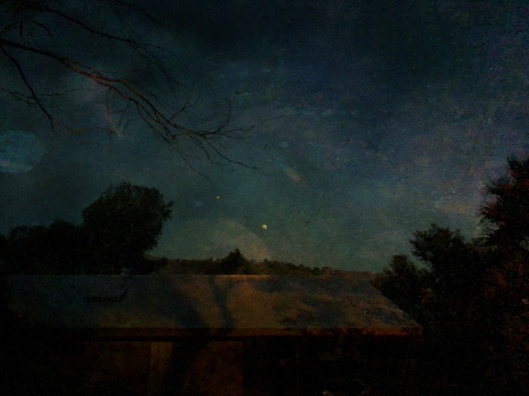 Each sale has its own unique quality. I’ve always strived to only sell things that are well kept and clean, even if they are well used or old. My friend is the same and so the items we had were of that ilk. The starting time was 7am, and believe me when I tell you, people were parked on the street at least 10 minutes before that, so you’d better have yourself organised! We had the sale at my friend’s house about a three minutes’ walk around the corner from our house. It was the morning of the beautiful blood moon and rare full eclipse, with Mars in attendance. As I set out from our house at 6.36am and walked up our driveway, I looked back. Over the roof of our house was the beautiful sight. I hoped it was an omen for good sales!

One person’s trash is another’s treasure…

The evening before, my friend had arranged things on tables, so that the following morning all we had to do was carry the tables out of the garage to the carport area. Easy. The punters swooped like hungry birds, one going immediately to the large number of CD’s and DVD’s we had, saying ‘Here they are!’ as if she had discovered gold! We haven’t played any of them in years and are not likely to, given we only have one old boom box left to play the CD’s, and nothing on which to play the DVD’s. Early on, a nicely presented and discerning woman came and very, very carefully looked over everything. She added an item at a time to her purchase pile. When she finished she had quite a stack and had to make two trips to her car. A little while later she returned, accumulating another stack of things and then departing. Finally, a while after that she returned again, buying several more items. We heard her say as she walked out of sight ‘you won’t see me again, but thank you for the great lawn sale!’

As they used to say in the newspaper in the small town I am from,

(In the link above, to my previous post on this topic, there are references to helpful guides. In addition you may find what Courtney Carver has to say helpful. This link is for clearing your wardrobe, but she has books and other courses you may find more interesting, or you can just use her newsletter for inspiration)