They were a new family in our neighbourhood. Partying and a high threshold for noise and disruption seemed to be their goals in life. We knew their daughter, our travel agent for a couple of years—lovely and good at her job. We also knew of the husband, reputed as a good builder. In fact the house they bought was in need of a renovation and was eventually turned into a stunning home.

The disruption to our quiet cul-de-sac-life was noticeable. Apparently they did not quite appreciate the subtle characteristic of the quiet neighbourhood. We wondered when it would calm down. A year or so after they moved in we heard on the grapevine that the son had had an accident which sounded very much like one from partying too hard. For a while there was doubt he would be able to follow on in his dad’s footsteps as a builder. As he recovered, we noticed that their large life seemed to get quieter and smaller.

A year or so later, we had returned from traveling only a week or so earlier. We were still at the settling in phase. I had let our dog out into our unfenced yard, which was our normal routine. I walked him mornings and either my husband or I walked him evenings as well. But for a little midday pee, he would wet the tree out the front on the golf course side of the house, and then settle himself in the sun on our grass until ready to come in again.

Over the recent year or so, I noticed he had gotten hard of hearing. He was 18 years old, after all, though he still looked fit as a two year old. A result of his growing deafness was that when I would call him, he would often go in the opposite direction, disoriented, no doubt. And I had not realised that occasionally he had started wandering a little further afield to the neighbours on either side of us, even climbing the steps to one house for a daily treat!! The secret life of pets! 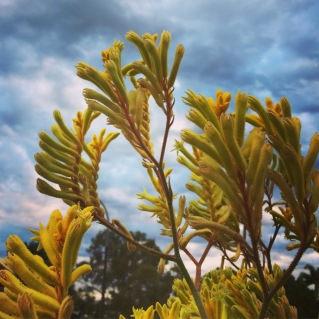 It was afternoon and I was home alone with Storm. I let him out and only a few minutes later there came a knock at the door. It was our close neighbour who had been feeding him the treats. Visibly shaken. ‘It’s Storm’. I sensed what was coming. He had been hit by a car on the road side of our house, the side where I thought he never ventured. Later everyone said that they had never seen him there before, which was some small comfort. Our neighbour assured me he died instantly but told me not to come up the driveway that he would bring him if I had something in which to wrap him. I handed Storm’s clean bedding fresh from the clothes line to our neighbour.

It was a horrible day, as you can imagine. I felt so responsible because I was the one who had opened the door for him. Later I realised it was far better that it was me than our daughter. I was surprised to see flowers at our door soon after, from the woman who had hit him. She was from the house of the noisy neighbours. I learned that she felt horrible and even though our neighbours said she was driving too fast around the bend, I had not witnessed it.

It seemed to me I could carry the burden of resentment and anger about it forever, or I could forgive and move on. I knew that no one would do such a thing purposely. I walked across to the house and the young son answered the door. I asked if I could see his Mum. As I entered I could see her and her husband, in the shadows of the room. ‘Let me have it’ she said. That was not why I went. Through my tears and choked words I told her Storm had been a rescue. He had lived 17 good years with us and that it was I who opened the door to let him out that day and that she mustn’t blame herself.

It took me longer to forgive myself.

For 7 years we have inched slowly toward each other. Forgiving is not forgetting. Very early on this hot Christmas morning as I returned from my walk, I saw their family gathering on the veranda. We waved and greeted each other warmly and I wished them all an unreserved Merry Christmas. I realised one of the best gifts I have ever given myself or anyone else, was the gift of forgiveness. One size fits all, and the returns are gratefully received.

xx blessings to you all.

20 thoughts on “the perfect gift”