Travel is a wonderful teacher. It has brought history to life for me when visiting other cultures, countries and especially within Australia. Don and I love to visit regional Australia because much of it is still reminiscent of how it was settled; how the people lived…and sadly, died. And it is full of surprises and genuine characters. 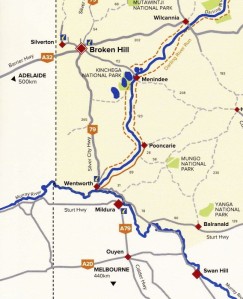 A close up of our travels

Detailed larger map is from this lighter area.

A few weeks ago we flew to Adelaide in South Australia. Our itinerary was to drive northeast from Adelaide to Broken Hill, New South Wales, south to Mildura in northern Victoria, and back to Adelaide again, incorporating three states, and seeing a variety of points in between.

Before leaving South Australia, we stopped at the town of Burra, where mining set the theme for the next few days. Copper was the main attraction in Burra. Rows of workers’ cottages remain, some being used as rentals for tourists, if you are so inclined. The land was owned by the investors and cottages built and leased back to the workers for 3 shillings a week. The first section of cottages was built in 1849 and imagine, the verandahs were not even added until around 1930! Very basic living, indeed. We also discovered Monday is Burra’s day off! Most cafés and shops were closed on Monday, the day we passed through. But it was a charming little town, nonetheless. 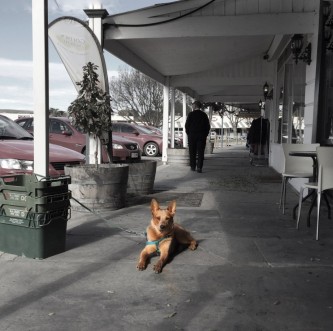 The open cut of the mine, Burra 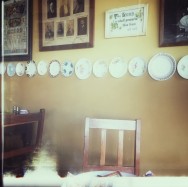 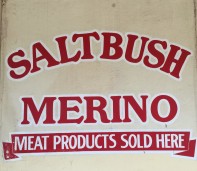 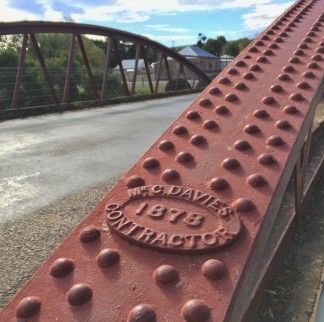 Lest I mislead you, there is not a lot except bush, wild goats and emus to see between the towns, which are sparsely set. Bladder control is an issue. It is not terribly scenic, but interesting how much of Outback Australia is like this, or similar. It underscores the determination of the early settlers, as much as anything else does. Just across the western border of New South Wales we arrived in the town of Broken Hill. Mostly, Broken Hill was built in the late 1800’s, as was much of this region of Australia. The mining of silver, lead and zinc was the big attraction. As best we can tell, a few people made quite a bit of money, but the rest of the settlers worked hard and many died young.

We began our only full day in Broken Hill, driving out of town to another, even smaller town named Silverton. Guess what they mined? Recently the town of Silverton is famous for the Mad Max films, and also the 1980’s version of the film ‘A Town Like Alice’, for which a small building was transformed as the film version of the town’s ice cream parlour. The real Alice Springs was already way too ‘modern’ to use as a setting for this story which took place at the end of WWII. 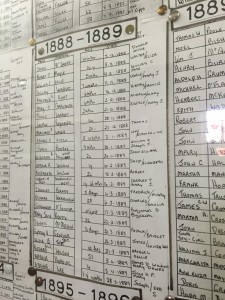 We found this in the Silverton Gaol museum, note the number of children who died that year.

Our first stop just outside the town of Silverton, was the cemetery. You can learn a lot from a cemetery. The wind was biting cold and the sky overcast that morning, which added to the sombre mood of the place. Many children died due to typhoid fever, rampant, until it was worked out how to clean the water. It was pretty gut wrenching to read the epitaphs. The cemetery covers 42 acres and only a portion of the graves have stones.

In the small, dusty remains of the town of Silverton was a pub, of course. There were wild donkeys roaming about, an interesting museum set up in the old Gaol, organised incredibly well by local volunteers, with oddities too numerous to mention. Saving you from endless descriptions, I have photos for you!

Fire place with snake and insect collection on mantel. Silverton

Three sons from the same family. So tragic.Silverton 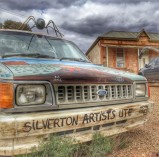 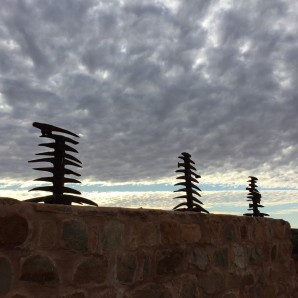 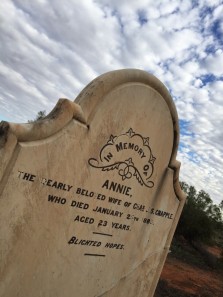 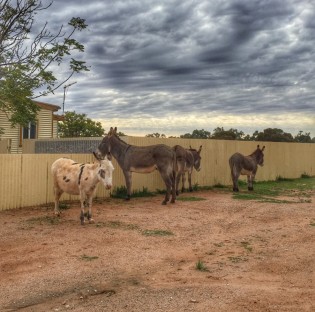 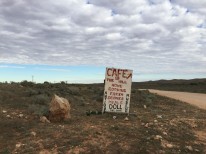 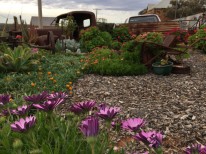 Garden in front of café. Silverton 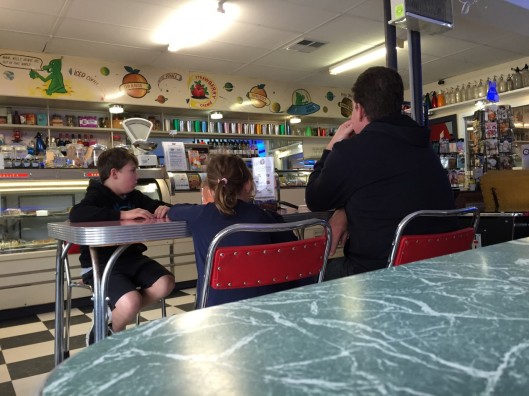 Back in Broken Hill we had a refreshment in a 1950’s style diner/café (above photo). Another random experience, not expected in regional outback Australia, but that is what travel is about! Next, we visited the Regional Art Gallery. What a shock. The entire (I think) exhibition from the previous year’s Archibald Prize was on display! This is a very well known portrait prize in Australia, and such a delight we often plan a yearly trip to Sydney when we know it will be on. As it turns out, we had missed the 2014 exhibition, and here it was in front of us…for free. What a wonderful surprise.

We were curious about the infamous Palace Hotel of Priscilla, Queen of the Desert’ movie fame, and so we walked the couple of blocks around to have a look. It is in the final stages of a renovation so the bar area wasn’t open, but the famous murals lining the walls of the entry and stairs were on display. It was quite a spectacle and for a moment you forgot where you were, thinking you must be in some Disney-esque themed brothel!!

Since it is winter and the sun sets rather early, we pushed on, deciding to try and get to the Living Desert and Sculpture Park outside of Broken Hill, in case the weather might be inclement the following morning. With showers falling all around us and dark clouds scudding about, the atmosphere atop the rocky outcrop, overlooking the plains was stunning. The bus scene from Priscilla Queen of the desert was filmed on these plains, and must be where the phrase was first uttered–miles and miles of nothing but miles and miles! On the distant horizon, was the tiny little eruption of Broken Hill. This was the stark Outback and it is still vast. In 1993 a symposium was held for a group of international sculptors to travel to the area and camp and create works that would remain in situ. The result is a very special destination that only adds to the character of the area. 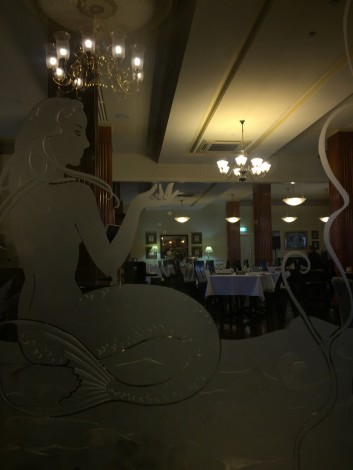 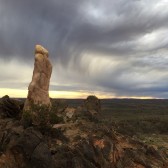 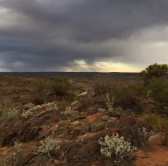 Broken Hill, far in the distance

In our Art Deco style hotel, The Royal Exchange, we had a dinner that was so surprising, we are still talking about it. To cook most of the meat and poultry, the chef uses a French method of cooking called ‘sous vide’. The meat is put into a sort of cryovac packet and poached in water very, very slowly, 12 hours or longer. This results in the most tender and flavourful of steaks I’ve ever put into my mouth. Alas, steak is not very photogenic and the texture and flavour would certainly not have translated, so I didn’t attempt a photo. You’ll have to take my word for it. Eat at the Royal Exchange.

The dining room with its fire blazing in the evening, was redolent with the charm of another era. Breakfasts were also delicious. The Portobello mushrooms with tomato, spinach, eggs and bacon were so delicious I had them again the second morning.

The second full day of our stay… oh, wait there was no second full day to our stay because my darling husband sometimes pushes us a bit fast, and short of time. He’s a work in progress. In his defence there was a problem with the hotel being fully booked and we would have had to change hotels if we stayed a third night, so he opted to move us on to Mildura the next day. For our upcoming trip in September, I reviewed the itinerary and then had him add a day to every stop. 🙂

Again, the drive to Mildura was mostly bush; Mallee trees, wild goats, some sheep and a few kangaroos and horses. We pulled up alongside the road so that I could photograph the goats, who were, of course, trying to escape quickly. I rolled down the car window and immediately regretted it. If someone ever tells you, ‘you smell like a billy goat’, this is NOT a compliment! Wild goats stink, people!! Apparently, they eat something called onion weed and that, plus their normal odour makes them rather repugnant. But they feed on saltbush, too, and this gives the meat a distinct flavour and once they have been fed normal food without onion weed in it for a couple of months, the meat is quite good, so I’m told. They used to be hunted to keep the numbers under control but these days, the farmers herd them up and ship them overseas for goat meat and breeding. Goodness knows the farmers need a win now and then! 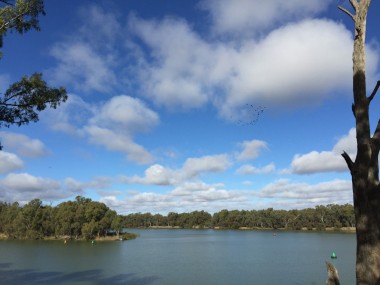 Mildura waterfront on the Murray River

Hangin with the gulls on the Murray River.

As we neared Mildura, we stopped near Wentworth at the confluence of the Murray and Darling Rivers. Australia, being the driest continent (save the Antarctic) in the world, and the Murray/Darling being our biggest source of inland water, made it seem like an essential stop on the journey. 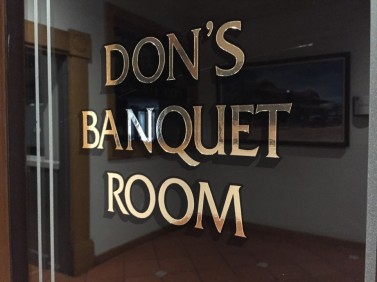 Don made sure I saw this 🙂

Grapes sun drying on the vine in Sunraysia region

The town of Mildura has a lovely waterfront along the Murray River. It is a real credit to them, and still being developed. The Grand Hotel, our abode for the night was originally established in the mid 1700’s as a Coffee House. There was a move to discourage the mine workers from drinking alcohol so Coffee Houses were built to fill that niche. The original building morphed over the years in both purpose and design, until its eventual reconstruction as an Art Deco hotel was reached in the early 1930’s. It has been refurbished but the Art Deco theme is still prominent. It turns out that Stefano De Pieri, whose restaurant I wrote about previously, married the daughter of the hotel’s owner and has established 4 restaurants and a micro brewery under the roof and adjacent to the hotel.

The best chips ever look normal, but are sooo delicious!!

Eating later than normal, and larger than normal breakfasts, meant that our need for lunch was minimal and not happening at optimal times. An hour and a half out of Adelaide the afternoon of the finish of this portion of our trip, I was hungry. I am not nice when I get too hungry. Ask my husband. And having food intolerances makes it doubly difficult for me to eat take away foods, since most of them are wheat and onion laden. I told him if we just saw a place that sold chips (french fries) that would suffice and hold me to dinner. We had several thwarted attempts to find such a place, given it was 2.30 in the afternoon. Then we drove into Nuriootpa. Gleaming like a red jewel (and I swear there was the feint sound of Hallelujah Chorus in the background) was The Nuriootpa Chicken Centre. Saved. It was so clean you could eat off the floor, and even well after lunch time they were doing a good, steady business. Now I know why. If you are ever in Nuri, find The Chicken Centre and buy a bag of chips. They were the absolute best I’ve ever eaten. They were photo worthy–TripAdvisor worthy, even. All chips henceforth shall be compared to the chips at Nuri–perfectly crunchy on the outside and creamy on the inside, seasoned with chicken salt and a dash of love, I’m sure.

So this was a sampling of Regional Outback Australia. It is full of surprises and you never know when you’ll have a gastronomic thrill as well!

(As always, if you scroll on the gallery photos their captions will appear, and if you click on the photos you can see them larger) 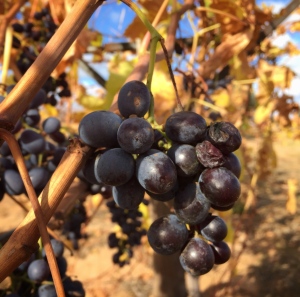 Grapes sun-drying on the vine in Sunraysia region 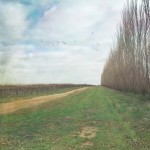 26 thoughts on “the surprising Outback…”