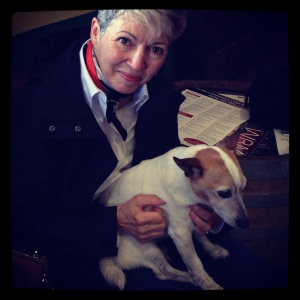 Apologies up front for this post… a bit disjointed, but I thought you might enjoy these few odds and ends from our recent trip.  Our American friends were keen to see the ‘real’ Australia, as well as visit as many wineries as practical. On our second day in Coonawarra we began with tasting at Redmond Winery cellar door… at ten in the morning. That’s a little early for me and my stomach to taste wine, so I gravitated toward taking photos and making friends.  It turns out my first encounter was a celebrity! Trevor has his own page in a book called Wine Dogs of Australia!  Who knew?  He was a sweetie but I left the winery covered in hair… note to self, ditch the black coat when cuddling animals with white fur. 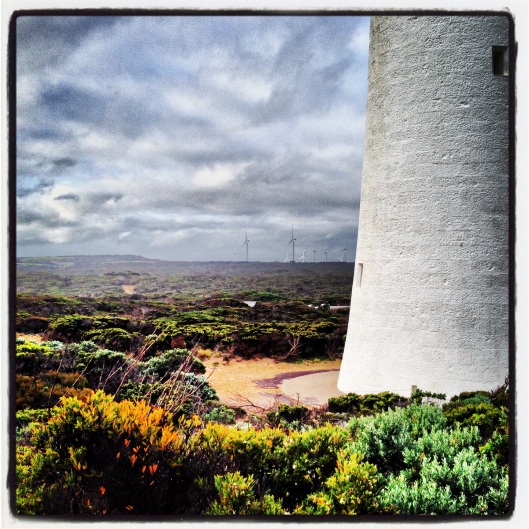 Some of the ridges, especially windy coastal areas, are being developed as modern wind farms to produce electricity.  They are intriguing forms, enormous, graceful kinetic sculptures, though I don’t have to live in their shadow.  I was somewhat disturbed to see them in the distance of the wild coastline near Cape Nelson… but the photo is interesting, nevertheless. In the last few years we have seen wind farms in Germany, Illinois, Wyoming and northern Scotland as well. To put into perspective how large the windmills (turbines) are, the small town of Millicent displayed one of the blades from this type of wind turbine.  Don walked to the far end of it, its tallest point, and stood next to it, to give some perspective.  Who knew? 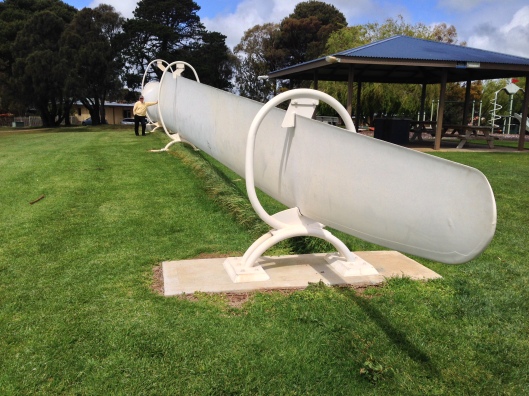 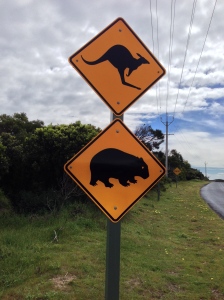 Travelling along the countryside, we came upon these signs indicating animal crossings on a section of road.  It struck me as humorous because a foreign traveller would look at these and except for the kangaroo, would not have a clue what else to look out for.  The silhouette below the one of the kangaroo is a wombat.  And the other sign depicts an echidna.  I assure you they look different in person than these silhouette images would lead you to believe but I get what they are attempting to do. I have seen moose signs in Wyoming, bear signs in Scotland, deer crossing signs in the Midwest of the USA, but this is the first time I have seen a sign for echidnas.  Who knew? 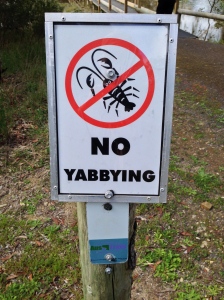 But the funniest one of all was this one at Lake McIntyre.  A yabby is a sort of fresh water crayfish and they are highly edible. ‘Yabbying’ is the colloquial term for catching them, but we both laughed a lot when we saw this sign that had made the colloquial, official!

These little things, as well as the breathtaking ones, are part of why we enjoy travel.  Now we know. And with my sharing, so do you.

9 thoughts on “Wine Dogs of Australia (and other odd things)”