I left the world of institutional living behind and we arrived at the hospital early for my last tango with radiation treatment. I decided I wanted one last kiosk coffee so Don and I walked from the oncology unit across to the hospital under the covered way. We had nearly arrived at the kiosk when I heard Don’s voice break into my reverie ‘Look, it’s Pat Wrenn’. I snapped back to the moment and looked quickly at the approaching faces and, sure enough, there was an aged version of the man who had been the ‘best man’ at our wedding 28 years ago, being pushed toward us in a wheel chair.  Don called out ‘Pat!’ and Pat looked at him and instantly recognized him. He held out his hand to me and recognized me as well. I leaned down to kiss him on the cheek, still not believing what had just happened.

Only yesterday we had discussed trying to see Pat as Don had seen Pat’s wife the day before when he went to the Parliament library where she works part time. She had told Don that Pat has a cyst on the brain that cannot be removed and he has quite bad dementia. She had told Don Pat was at the hospital but that she doubted he would know us as he often did not even recognize her. We wondered if he would even know us if we visited and we decided to wait and see how long my treatment took and perhaps try to catch him after. But here he was right at the appointed time Fate intended us to meet. We sat and visited for a while and he is in many ways the same humorous gentleman he has always been. It is doubtful he will remember what we discussed but maybe he will remember how it made him feel for his two old friends to visit him.

As I hurried back to oncology I was feeling overwhelmed by the perfection of what had just happened. What are the chances that on his first outing in weeks he would be under that passageway at the exact same time on the exact same day, our last day, as us?  It was, at the very least, another ‘full circle’ moment for me.

My head still reeling, I hurried into oncology for the final time. I gave Penny my treatment schedule and one last time she attached the red plastic hospital bracelet. I felt like I was going to graduation! I carried the cupcakes and card I had brought to the crew who had been ‘my team’ and I sat in the chair to wait my turn for treatment. Within a few minutes I was relating the encounter to Julia and Bonnie.  When I finish they were also amazed by the synchronisity of it all. I told them how much I appreciate having known them and thanked them for being so wonderful. And the tears would not be held back any longer. I wanted them to know how much they have all helped me but I doubt they can fully comprehend. Do they know that those of us who are thrust into this situation not of our choosing rely on them to smile and make us feel normal, help us get through it?

Soon Chris came to retrieve me to have my treatment.  As we walked down the hallway, Lee caught up to us to give me his good wishes.  He had given me quite a few treatments over the weeks, and we were kindred spirits in food tastes and our Mac equipment!  Cyber hugs to you Lee!

I lay there, under the radiation machine for one last time, trying to soak in what this feels like, the aloneness of it, the nothingness of it, the rays soaking into my body, while the music of the 60’s hit, ‘Locomotion’ played on the iPod system.  How much more surreal can a person’s life be?  When I was finished, Chris and Ellie bid me farewell and best wishes and I thanked them for their smiles and kindness.  As I was leaving Kira and Roz wished me well and I walked out feeling like a celebrity as they had all come to say goodbye.  I told Kira they had made it ‘fun’.  If having cancer can be fun, my experience had been, crazy people at the bus stop, institutional living, Saturday markets and all!  At the the front desk Penny gave me back my finished treatment schedule, and snipped the hospital bracelet from my wrist for the last time.  I thanked them all and they, too, wished me well.  I looked at the people waiting as I walked out and said a quick little prayer for them, and a ‘thank you’ that I was no longer one of ‘the waiting’.

Don and I had lunch (The Coffee Club makes a nice, light Greek Salad!) and we headed for the airport.  The flight was on time and blissfully uneventful and almost before I realised it the MacDonnell Ranges were in front of us, and the desert sun was shining through the window onto my foot as the plane banked to land.  I could see the fires across the Ranges and the smoke filled air, but none of that mattered.  I was home. And I had no doubt that I had been exactly where I was supposed to be, doing exactly what I was meant to be doing for the last three months and 10 days. 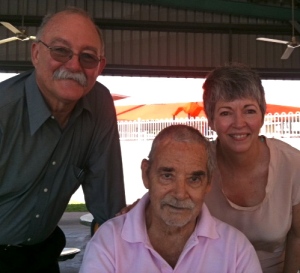 2 thoughts on “There are no ‘Coincidences’”