There is probably little left that I can add to what has already been said about Fleur Sullivan, either by herself or by the many thousands who have eaten at one of her restaurants. Even when the renowned Rick Stein was asked if he could eat any place in the world, where would it be? Answered Fleur’s Place in Moeraki ‘because how could you want anything more?’

Fortunately a colleague had mentioned this to Don some weeks before we began our trip, because you definitely need a booking to be assured of a table. We had only a couple of hours’ drive between Dunedin and Oamaru the day we drove through Moeraki, and we planned it so we could have lunch at Fleur’s Place. But first…we had to take me to Mazagran Espresso Bar* before leaving Dunedin. I needed another one of the best coffees I’ve ever had, having also had one the day before. Thank you Mr. Google. Don is very patient with my coffee addiction, just as I am patient with his wine enthusiasm. We have suffered worse. 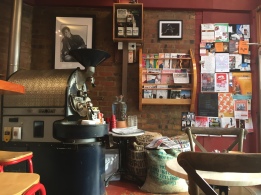 Mazagran roasts and grinds their own coffee beans to order. 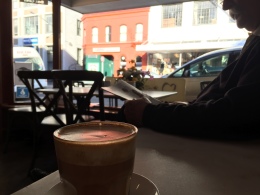 Only 11 seats in the café, four of them outside

All coffee-d up and ready for the next leg of our adventure we decided to explore an area just south of Moeraki called Shag Point. And yes, we did see the real life idiom ‘Shag on a rock’ that is a familiar Aussie description for someone hanging about, alone. Shags are a type of bird, and they were true to their reputation, lonely and abandoned looking, though in large groups. I know, makes no sense.  It was also a viewing point for the native New Zealand fur seals. They lazed about that sunny morning on the well worn cliffs…looking for all the world like large brown…well, you know…logs. Ahem. My iPhone makes them look smaller and farther away than they were. They were enormous. It was heartening to see them in quite a few places around the South Island during the three weeks we visited. They had been endangered at one point, hunted to near obliteration for their fur, but are now protected and have repopulated well.

It was still a bit early for our one o’clock lunch at Fleur’s so we drove up the coast just a few minutes passed the turn off to Moeraki to view another natural phenomenon, the Moeraki boulders. These are very peculiar, perfectly round, rock formations like nothing we had ever seen. Some looked as if the cliffs were giving birth, revealing the boulders where they must have formed millions of years previously. 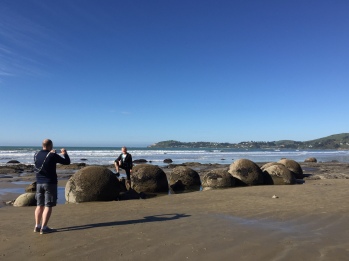 visitors shown at the boulders, for scale

birth of a Moeraki boulder

boulder of Moeraki with large seaweed

Finally, the time was near when we could deliver ourselves to the much anticipated lunch. Still being a few minutes early, we slowly approached, observing the setting from across the bay, then closer, letting the ambiance soak in. The restaurant was purpose built but it has the casual feel of a hybrid fisherman’s cottage come boat shed. Inside, neatly scrawled all over the walls and window sills patrons had left their names and often their gratitude for Fleur, praise for the food and atmosphere. (I guess people just need to validate their having been in a place, as per last post…) Once again, we had never been any place quite like it. This was becoming a mantra for our visit to the South Island. 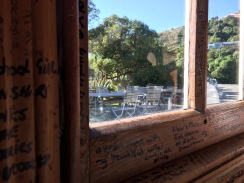 Fleur’s Place from across the small bay 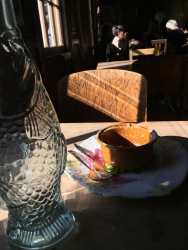 If you don’t like seafood you probably wouldn’t have liked the menu, however, we were spoilt for choice. Given my consumption limitations I stayed with my new favourite fish, Blue Cod, a New Zealand speciality. It was pan fried with no flour and served on a bed of the freshest cooked vegetables, accompanied by home made tartar sauce and lemon. That fish had probably been swimming around only 12 hours previously and the freshness was definitely reflected in the flavour. Now, I didn’t really need dessert, but if you think a little thing like that was going to stop me trying Fleur’s Crème Brûlée, you don’t know me very well! Don ordered an apple crumble with homemade ice-cream for his dessert. We did not need dinner that evening. And this time, that really did stop us!

Blue Cod with fresh vegetables and home made tartar sauce 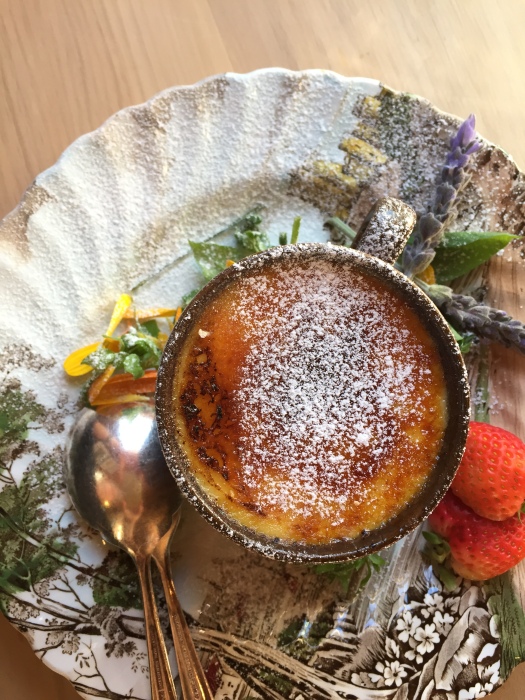 Fleur’s Place was really as much an experience as it was a restaurant. Watching 76 year old Fleur hefting boxes around and fussing about place settings, then sitting down with some of the diners, and then returning to her duties was like a well rehearsed play. Two of the people who served us had French accents and one was New Zealand. We wondered with Fleur’s french name if there was a connection and I suppose I will find out if I read her memoir. (there is a nice photo of Fleur on the cover)

The entire experience was delightful from beginning to end and we kind of hated to leave when our meal was finished. So we wandered around outside and I happily took a few more photos. 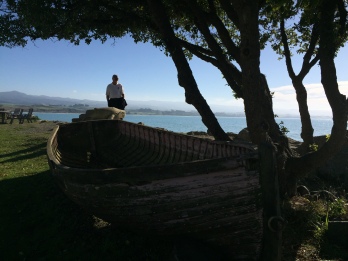 Finally able to shed our jackets for a while on this sunny day.

Somewhat reluctantly we drove on to what was our destination for the next three nights. Our accommodation in Oamaru (Fleur’s hometown) was a 1930’s B&B. Our hostess gave us details and said it was an ideal evening to go and see the Fairy Penguins arrive on shore. So off we went to purchase tickets for the nightly arrival of the adorable, little blue penguins. When I say little, I mean tiny. They are only about 30cm (12”) tall, some even smaller. They come in after dark, in ‘rafts’ (groups) of about 20-30 at a time. The water is rough and they have to scramble up a rocky bank and you fear for them every time. But this is their life and they are well adapted. That night 148 arrived and scurried across the open ground between the two pavilions of spectators. We were told to be very quiet and there was absolutely no photography allowed so you will have to check out this link and imagine the cuteness overload! I still smile every time I recall those impossibly small, blue darlings*.

We arrived ‘home’ at our B&B, very cold from being on Penguin watch, but our hosts had turned on the electric blanket, the under floor heating in the bathroom, and the heater for the room. Now you don’t get that in a hotel!! We snuggled in, dreaming of Fleur’s and little blue apparitions.

When I think back about this day, I see that it embodied the very essence of New Zealand. It had been a perfect banquet of quirkiness, kind people, wild animals, and amazing food, against a backdrop of stunning beauty, wrapped up in one delicious day. The road less traveled is a wonder. 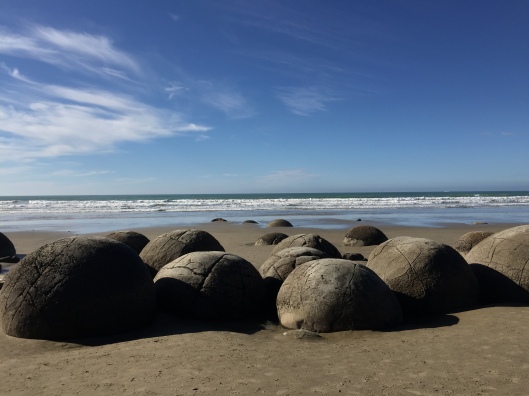 boulders and the sea

*Mazagran is a cold, sweetened coffee drink that originated in Algeria

*The only other place in the world you can see fairy penguins in the wild, besides New Zealand, is Phillip Island in Australia. The observation stands in Oamaru were built well after the preservation of the dwindling colony was reversed and all steps have been taken to protect this naturally occurring colony.