life's questions, thoughts, what people do

It is not normal for me to be able to photograph things I don’t understand, so when it happened twice in one week, it gave me pause for thought, and that is why I share it with you.

One morning as I walked I came to the road that I cross. There in the exact middle of the road was a piece of litter. Rubbish. Refuse. Sunlight fell across it, as if to highlight the faux pas. Since I am a light chaser, and there was not a car in sight, it was a shot I could not resist. I actually believe we can highlight inequities more effectively by using beauty than by raging.

the beauty of ugliness

Litter is possibly number one on my list of things I don’t understand. I know the excuses for it, but none of them are valid reasons, in my experience. The very least we can do to help the earth and to be thoughtful of our environment is take our rubbish with us or deposit it carefully.

The second event happened only a few days after the first one, but in a completely different place, Adelaide in South Australia. We were visiting our daughter and while she was at work and my husband was at the reference library, I was doing shopping errands in the city. As I walked down the Mall I saw a woman bend to give a man, who was begging, an apple. He accepted it and seemed to put it in his pocket.

A short while later I was walking passed the spot again, and saw this… 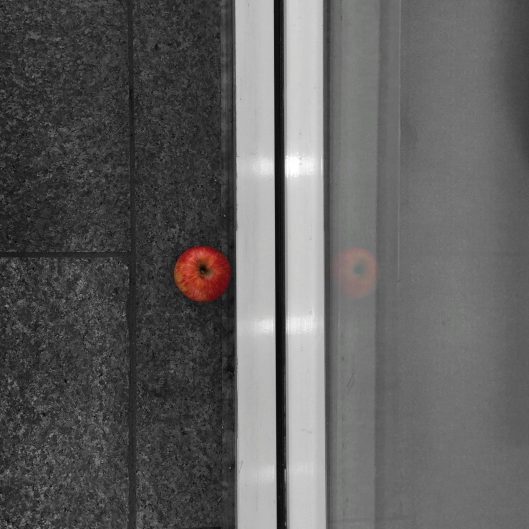 The apple. At the time, when I saw the man, something about him had struck me as slightly ‘not quite right’. His beard was a little too well trimmed, his clothes a little bit too clean and tidy. And yet, he was clearly begging. And clearly he was not begging for food. I suppose it is possible he can’t eat apples. I can’t eat raw apples, so I can allow that may be possible. Perhaps my assessment of his appearance was judgemental, thinking that homeless people are all a bit scruffy looking. Perhaps he was being thoughtful and leaving the apple for someone who needed it worse.

Later that same morning I was approached by an elderly man asking for money. Not food. Money. The experience with the first man made me wary of the second one. Not that I usually contribute to street beggars, but it made me wonder. If I gave him money, would he use it for alcohol or drugs or food? Was I being compassionate by refusing—or by donating? How does one know what to do? Soon after, as I passed a mobile coffee and cafe vendor who I believe to be reputable in helping to feed the homeless, I made my contribution to him. Perhaps that was the right thing, perhaps not. How does one know? I have come to believe that it is the intention with which we do these things that matters. Is there compassion and love behind the act?

These are two very different events, most of us have seen many times in our lives. We are confronted with decisions and therefor, actions, or not. After 63 years on this earth, I wish I had gotten beyond my misunderstanding of such commonplace things. But I have not. Share your thoughts with me. Illuminate me.

25 thoughts on “a pause for thought…”