We all have our little eccentricities—peccadillos…oddball ways. When we are young most of us use up a lot of energy trying to hide these from our fellow humans. All the while we seek our true selves. These are part of our true selves, if only we could see. As we age and become more comfortable in the world and in our own skin, we let go of some of the smoke and mirrors and ease into the dreaminess of being who we are.

Many times I’ve written about my morning walks, and the treasures I carry home with me. It is with childlike delight I pick up these pieces of nature and spirit them away with me. Part of my experience is to photograph them, as you know. Photography helps me study and internalise the essence of the treasures, as well as hopefully make something beautiful to share. I am sure most of the inhabitants of our neighbourhood have seen me roaming the hills and paths, carrying things. I’m also sure some of them must wonder what I’m doing, or at least think ‘there goes that strange lady walking and carrying things, stooping to take photos and…’

…one morning about three quarters of the way through my walk, something beckoned me, saying

It was a stunning piece of paperbark–quite long and intact (about 900mm x 200mm or 3ft x 8in), and must have only recently fallen from its tree*, since there was no sign it had been there long.

Carrying it home was a little like carrying a small limp, sleeping child but not as heavy. No doubt there were local eyes upon me, but I didn’t care. It was so worth it, whatever thoughts of my strangeness were sent into the ethers. I have used it for a few still life photos, but mostly I admire its multi-layered, velvety texture whenever I gaze into the corner of the room. The layers are really as light as paper but upon one another, as they are, strong and resilient. 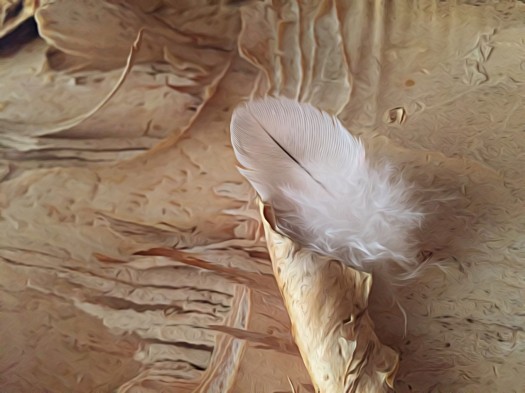 Recently I was coming home along the street in the early morning. It was ‘bin day’, when the garbage is collected. In front of nearly every house on the street was a tall green wheelie bin holding the weekly refuse. It is sometimes a smelly walk on those mornings, but, undaunted, and in the home stretch, something caught my attention…

Out of the top, from under the bin lid, was a distinctive trail of green texture. No, no, nothing slimy–grass, I thought. Falling in long graceful tendrils, it was not the usual grass from one’s yard.

I am a tactile person, often seeing with my hands, so I touched it, hoping for clues. I wondered how I might photograph it, or if it was of interest to anyone but me. Reluctantly, I decided it was not. I lingered, slipping into a grass reverie, stroking the pliable green filaments, partially dry but not quite limp. Remnants of a grass tree, I decided. And then I realised…

I was standing in the street,

coming out of the top of someone’s garbage bin.

Back away from the bin, Ardys. Now. Slowly walk away. Home.

I think I’m hilarious, even if no one else does. I am harmless in my reveries. If I become the eccentric old walking woman of my neighbourhood, so be it. They could do worse.

With my own painting, in evening light

(*Melaleuca leucadendra, Weeping Paperbark, is native to Queensland, Western Australia and the Northern Territory. It is widely distributed from the Kimberleys to Cape York and south to Bundaberg. It also occurs in New Guinea and the Solomon Islands. Although it will withstand some frost, it is not recommended for cold areas such as mountainous regions or Tasmania. It will grow well in most other areas, being very tolerant to wet or dry conditions. There are about 200 species of paperbark but the one I’ve depicted here is the leucadendra. Indigenous people used strips of bark from this tree and tied them to a frame of Dodonaea branches to build huts that were waterproof. The bark was used to wrap food before cooking in an underground oven called a kap mari. It was also used to wrap the bodies of their dead. The bark from trunks of very large trees was used to make bark canoes. The crushed leaves were used to treat respiratory infections and the flowers for making a sweet drink.)

20 thoughts on “eccentric or just uninhibited?”