Today is my niece’s wedding day.  She is my only niece and she is a dear young woman and I would love to have been at her wedding, but circumstances don’t allow it.  I have seen some photos of the preparations and they are considerable.  The wedding is taking place at my brother’s farm and he has worked hard for months to get everything just perfect.  Because that’s how he rolls!  He is like our father in that way.

And 30 years ago this passed June, my own Dad was working hard to finish the patio he had been building for FOURTEEN years, so that we could have our small wedding reception there.  In fact, the day before we walked down the isle, I was on my hands and knees staining the concrete ‘maiden’ that was the central piece of the fountain he built. (see photo of our five year old daughter standing next to ‘the maiden’ in the snow, about 10 years after our wedding)

At the time, I was somewhat euphoric with pre-marriage bliss, and was not worried about my manicure.  But also, I was kind of panicked, wondering if it would actually be finished in time.  Inside the house my cousin and Mother were baking the wedding cake. We were rebels, it was a carrot cake, before those kinds of cakes were popular. My cousin, her husband and three boys had travelled all the way from Wyoming to Ohio to attend, and just as importantly, for her to bake my wedding cake.  She and I shared a room in our family home for a year and we are truly as close as any sisters could be, but really, flying halfway across the country to bake a wedding cake is above and beyond!  AND she had already made the sugar flower decorations beforehand, and carried them with her.  I’m still in awe.

My best friend had to drive from Michigan to southern Ohio to be my Maid of Honour and our Best Man flew from Australia to take part!  Friends came from Florida and Chicago too, so the far points of the country, and the world, were well represented for such a small gathering. There were only 42 friends and family at our wedding but we kept it small because big would have been too complicated and too expensive.  It cost us the sum of a bigger wedding just for the airfares and expenses to get married and move me to Australia, but regardless, we would have gone for small.

Bird’s eye view of the reception (yes, my Dad faced and laid every piece of that stone wall!)

I had been living in Florida and had resigned my job and sold nearly everything I owned and packed the rest up and shipped it to Australia, a country I had yet to lay eyes on for the first time.  It took months of preparation since I was also applying for a resident’s visa and working full time and corresponding with my husband-to-be 10,000 miles away, while planning our small wedding.  It was a lot, but love carries us through these things. 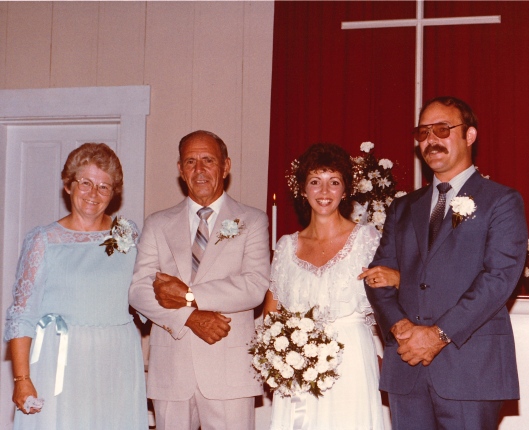 My parents and us at the church

My Dad was painfully ‘torn’ throughout the lead up to the wedding.  He didn’t want to let his only daughter down so he persevered with the patio, but he hated that I was going to Australia to live.  Hated it.  At the rehearsal he refused to walk me down the isle and until the wedding, I had not known if he would do it or not.  At the last moment he acquiesced and grabbed my arm and asked ‘what do I do?’ (since he had not participated in the rehearsal!)  I said, ‘Don’t worry, follow me.’  Later, at the reception, which was a non-alcoholic event, his friend spirited him away from the main activity and got him a bit ‘tipsy’ so that when we were leaving the reception Dad leaned over and whispered in my ear ‘keep your panties on!’  My Dad was known for speaking his mind but that one was a surprise. 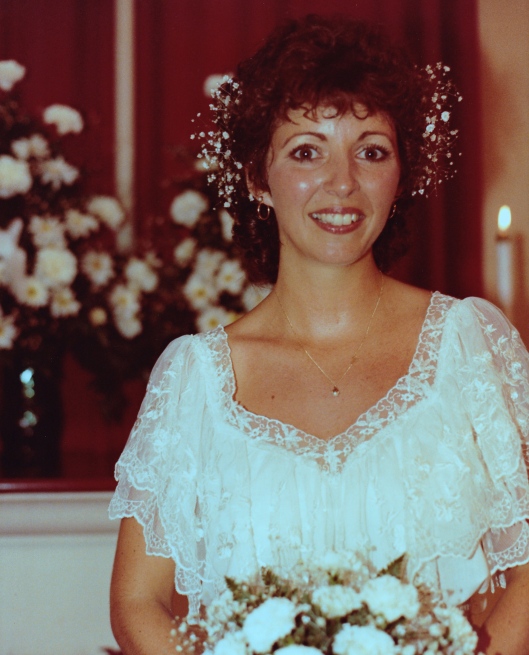 I reflect now and think it was all perfect and hope that my niece feels the same about her day in 30 years.  I see my brother who loves his daughter and think back on the love of my father and I see both the similarities and the differences in the two men.  Being truly loved is one of life’s greatest treasures, certainly both my niece and I share that gift.

Today when I wish so much I could be elsewhere I think back to my Dad’s advice… I’m just putting my ‘big girl panties’ on and thinking good thoughts.

7 thoughts on “A wedding? Keep your britches on!”