For those of you who aren’t bread makers or interested in any of the process, you may change the channel now.  I know some of my friends and fellow bloggers are bread makers and I thought you might be interested in something I have tried.

Five or so months ago when I was researching how to make my own sourdough starter I came across an article that described what to do if you have a period of time where you can’t feed your ‘pet’ (starter).  It is hard to find sourdough sitters, and I figured since we travel, at some stage I would need this tidbit of information.  But my steel trap mind failed to tell me to print the instructions for such future use.  So we will be relying on my memory here.  My recollection is that the instruction was fairly general, anyway. Since I am a novice sourdough maker, and now working from my sometimes patchy memory, I laugh at my audaciousness to even try the process without written instruction, but what is Life if not an experiment?

It begins with freezing your starter… but not in a big glob.  You spread it out thinly (maybe 1-2 millimetres thick) onto a sheet of non-stick (silicone) paper on a baking sheet that will fit into your freezer.  I couldn’t recall what length of time the starter was to be frozen, but not wanting to freeze the toes off my little darling, I only froze it a few hours, until it was good and crunchy (eew, now I’m feeling morbid….).  Then, as instructed, I peeled it off the paper and broke it into pieces and put all into a zip lock bag and into the dark recesses of the freezer.  Gosh, my memory may not be so bad after all…

Tic-toc… dissolve scene to 7 weeks hence.  As per my now even more vague memory of the description, I popped the broken pieces back into my favourite starter jar, added a bit of water and watched until it was thawed, at which time I added about the same amount (1 T) of flour to give the little yeasties something to eat after their winter’s nap, and then stirred thoroughly for 30 seconds.  And walked away.  As most of you know, it’s the walking away that is the hardest part…

The house was quite cold overnight, about 15-17C, and only up to about 24C during the day, which is really not quite warm enough.  The rye starter that I use likes to be at about 20-25C just after feeding, but when stored in the fridge in between feedings it is fine at colder temps.  Since time and temperature were inexact, I decided smell was the key.  All during the process I was led by my nose.  The smell should be kind of tangy-sweet and nutty. If the starter takes on a musty, mouldy smell, it is gone to God.

I could do nothing about the cold house at night so I just gave it longer to get started than you might otherwise do if it was summer and the house was warmer.

After another 36 hours, the smell in both jars was still nutty and sweet but still very low activity.  However, the weather had warmed and the house had been 27C inside that day and I was hoping this might kick things along. After a couple of days I finally spotted a few bubbles but activity was not what I thought it should be, so I divided it and fed both jars, just to give me some insurance, in case one jar suddenly took a turn for the worse, though logically if one died so would the other since they were sitting side by side on the counter! 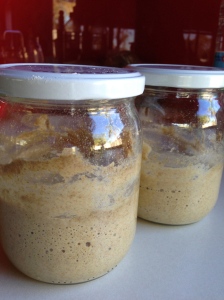 After another two days, on the morning of the sixth day, I was rewarded with two jars of bubbly mixtures!  Proof of Life!  So now that my yeast has cloned, can I interest anyone in a pet? Maintenance is minimal, only needs feeding once a week… 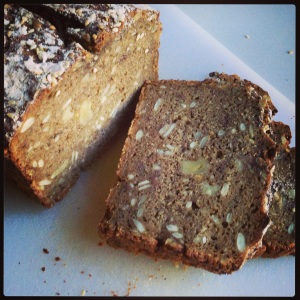 (As it turns out I could have created a whole new starter in the amount of time it took to revive my old one, but I liked the flavour of the old one and wanted to keep it if I could, so that is why I have persevered)

9 thoughts on “New pet anyone?”