When we arrived at the oncology centre today, there were about 6 or 8 people gathered right in the doorway leading inside, and they barely left room for us to squeeze by to get in for treatment.  It was a media group from Channel 9 and they were happily chatting away about their own priorities with, seemingly, not a thought that they were blocking those of us for whom the place actually existed!  It was so annoying.  Excuse me!  Sick people here, do you mind?

There is a thing I have often thought about when I was walking down the street, or sitting somewhere in public while waiting for a bus, or people watching.  Someone looks harried, or sad, or happy and you wonder ‘what is their story’?  Have they just had good news from their boss, or a sad call from a parent?

A couple of months ago as I walked along the bustling streets of Adelaide after my surgery, careful not to bump into anyone so that it would not injure the incision, I was aware that people would look at me and not even know there was anything going on in my life. What is her story?  I looked completely normal, but I felt like I was hiding a secret.  That first day venturing out of the hotel, I sat there in the Mall on a bench drinking a coffee, trying to feel like one of the crowd.  I wanted to be in the moment, hear the voices and sounds of the human race as it rushed by me, be reassured I was still me, still part of the ‘race’.

Most of us go into public masking our trials and troubles outwardly so that we will look ‘normal’. And what would be nice is if someone saw just ‘normal us’, and stepped aside for us, or opened a door, or smiled.  Today I resented the media people in their lipstick and high heels and suits, not even thinking about us enough to step aside and clear the doorway.  This place is not just a news story, it is where we come to cope with a life changing disease and treatment. Can’t we maybe think about each other just a little bit more?  But in a good way? 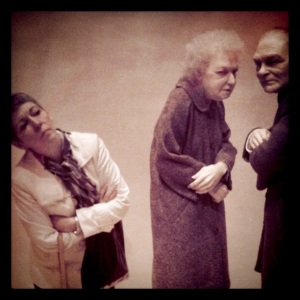 What is their story?

2 thoughts on ““You wouldn’t worry about what others thought of you, if only you knew how little they do””