We have been away traveling for nearly six weeks. I was going to give you a heads up that I might not be writing and then, with no warning, I developed a nasty head cold a week out from departure. It did not go away before flying. This is not a good thing. If you have ever had to fly when your sinuses are in turmoil, you will know what I mean. In fact the cough and sinus stuff did not leave until three weeks into the trip. So, I was not feeling like writing much of anything and hope you understand.

Travel is a good thing. It is. But it is not among the easier undertakings one might pursue. When I say travel, I’m not talking about a vacation to the beach where you bask all day, between margaritas and naps. Our version of travel, while perhaps not arduous, does deplete one’s energy. We walk a lot, see a lot, process a lot of information. Therein lies the second physical challenge for this trip. Walking. I have had a sore foot for months. It gets better and then worse, then even worse still, which it did on the trip. ‘Plantar Fasciitis’ is a common problem for which there is not much known about either cause or cure. Some things work and some don’t. Sometimes it leaves and sometimes it doesn’t. I know because I had it 15 or so years ago and that is exactly what I experienced. The exercises the podiatrist gave me did not work, in fact made it worse. Stopping them, adding stretches of my own saw it go away in a couple of months. This time I’ve had it much longer, have tried both the previous methods of stretching, as well as nothing, had a couple of days of complete absence of symptoms but essentially nothing has fixed it. So I walked. In pain. For six weeks.

I dropped into bed every night of the trip, exhausted mentally and physically, but did actually manage to take in the experiences and enjoy it for the most part. Just not the pain.

And while we are at it, there are a few other things I will enjoy not dealing with for a while.

The foot is strapped and receiving regular ice packs. The mountain of laundry is done, repairs to the garden are nearly done. And there are murmurs…of future adventure…

What keeps me traveling? I’m glad you asked. The mechanics of it are tiring, frustrating and downright unpleasant at times. However…when things take my breath away, or a sudden connection of a piece of knowledge turns on a light inside me, or something unexpected brings me to tears, it feels all worthwhile. When I see Wells Cathedral and a lump sticks in my throat, when I am gobsmacked by the incredible Guggenheim at Bilbao, when a Spanish woman spins her grandson in dance to a Basque folk song, when the most powerful show of water I’ve ever seen tumbles and mesmerises so that I can hardly look away, or when I stop in an ancient cemetery and realise that the man in that grave signed the Declaration of Independence…that is when I know I’m not done yet.

It hurts so good…give me more. 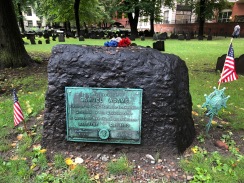 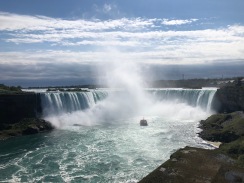 Niagara Falls from the Canadian side 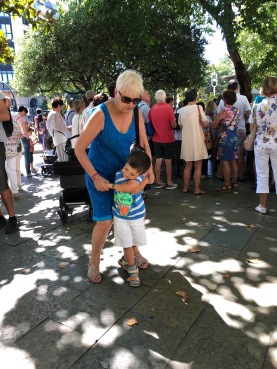 Dancing to the Basque Folk songs in Donostia-San Sebastian