There’s a saying in Australia “Wouldn’t be dead for quids.” Quids are pounds in the English money they used before the Australian dollar…and dead…is dead. So we have had nothing but days you wouldn’t want to miss for anything, in other words, since we arrived in New Zealand. Even the two very wet days. After the last post we traveled from Haast  having had a cold and wet 24 hours… By the time we had traveled up over the pass, the temperatures had dropped to 3C, that is pretty cold in anyone’s book. While it was raining at our level, only a short distance up the mountains we could see snow accumulating. This was a minor worry because we did not have snow tyres on the car we hired. 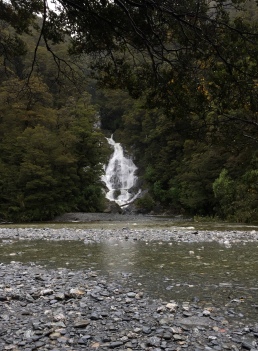 Fantail falls, along the very wet drive from Haast to Queenstown

Native cabbage tree, ferns and snow on the southern alps

The rain was incredible, sending ribbons of water flowing from every opportunistic crevice, creating road side waterfalls. Water flowed over mossy rocks, glistened from tiny streams up high, gathering in white torrents as they pounded into the creeks and rivers along the roads. The thing we had become keenly aware of was how tenuous the traveling here can be…humming along minding your own business one minute, and a slippage impeding your progress the next. When you start noticing, all along the roads are just loose rocks that have come tumbling down during inclement weather, earthquakes, or just because… We continually encountered road works, some are still reconstructions from the earthquakes in 2010-11, some just ongoing and never ending maintenance. This is a small country in land mass and also by population with only about 4.7 million people. And when the roads are impassable life is very, very difficult here. The reality of what a huge job this must be for the government really hits you when you drive all around the island as we are doing. The ‘roadings’ crews, as the workers are called are a very dedicated and skilled bunch.

The average fall was well maintained;

And when the tracks were simply bogs

It started raining cats and dogs.

After a drought of half an hour

We had a most refreshing shower;

And then; most curious thing of all

A gentle rain began to fall

Next day but one was fairly dry

Save for one deluge from the sky,

Which wetted the party to the skin

And then at last—the rain set in.

—Anonymous  (From the information center in Haast)

As we made our way up over the pass, the ‘divide’ as it is known, we noticed the river was flowing the opposite direction. Further down toward Queenstown the temperature started to rise again—a balmy 7C! Though veiled in fog and cloud we could see the spectacular setting of Queenstown, which only got more spectacular as the clouds lifted over the coming days. The thing about rainy days, is it makes the sunny ones even more stunning. 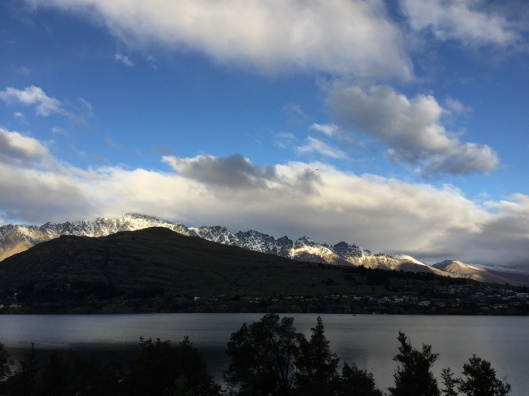 View from our hotel room in Queenstown

We’d been traveling long enough by Queenstown that we had begun to gather some knowledge about some of the specialities of New Zealand. They are famous for their dairy products, well, at least in this part of the world. The cheeses and milks are delicious. We ate cheese made in Oamaru that was some of the best we have eaten. Their Sauvignon Blanc is second to none here, the grapes loving the volcanic soils and climate of the central Otago region. Another specialty that we were already aware of are the bee products. The humble honey bee uses the nectar from the Manuka trees (Ti Tree) to make a honey that is highly prized for it’s antibacterial properties, and contribution to health gut microbiome. New Zealand actively protects this industry and it is doing well for them after many years of development. Be careful if you buy Manuka honey that it is authentic, some attempts have been made to counterfeit the products. It can be very expensive for the authentic products so research it and know what you are getting. 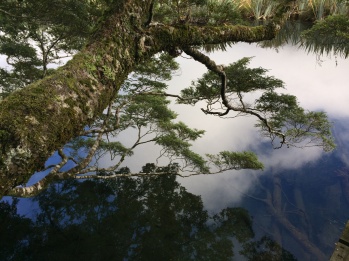 Reflections in mirror lake on the way to Milford Sound

The long and sometimes terrifying bus ride to Milford Sound

Another very interesting industry, we have been told, started here in New Zealand back in the 1970’s, and that is farming deer. Mostly the Red deer are farmed, for venison and milk, and apparently for the velvet from the antlers, which is used for various medical products. The milk is highly prized in China, being used in cosmetic products. Early white settlers brought deer and rabbits and possums to New Zealand to hunt as well as eat. The animals adapted so well here they are now a nuisance in huge proportions in some areas. So the government allows hunting of these animals, sometimes for bounty, all year around…with one exception. Wapiti. What is a Wapiti you ask? It is an American Indian name for Elk. The Wapiti elk were gifted to New Zealand from America originally, but have since become feral. However, the government does require hunters to have a license and they are only allowed to hunt them during a specific season. We have also learned that some farmers raise Wapiti as well as deer and we have seen them grazing in the same paddocks, especially in the south western region of the South Island. 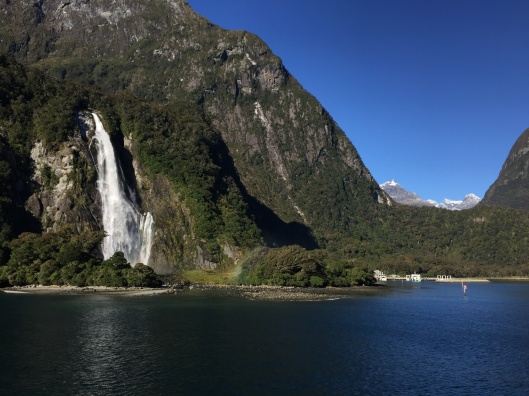 One of many waterfalls in Milford Sound

Cruising on Milford Sound, a natural fiord, and the wettest place in New Zealand

I will most likely have to post the remainder of things after we return home as I have hardly any time to write while we are traveling. This tiny country has held many surprises and is still revealing itself to us daily.

13 thoughts on “land of milk, honey and Wapiti…”