I’ve just read that a blog I follow is on ‘life support’. In my case it is the author of my blog who is nearly on life support. I have been struck by a chronic case of ennui. It’s a great word, unless, of course you are in that state of being…

The only bright spot was two weeks ago when our daughter contacted me that she had managed to get two tickets to the sold out Taylor Swift concert in Adelaide. Did I want to come see it with her? I had to get my upcoming flight moved forward two days to make it in time, but our brilliant travel agent got it done.

Neither our daughter or I are in Tay-Tay’s normal target audience, but for some reason we both wanted to see her. I think because she is a class act. The average age of most attendees was about 15, though there were some parents in their 40’s, perhaps, accompanying their daughters. But nowhere did we see another silver haired 62 year old, I can assure you! Never mind, age is just a number, and silver hair is just lacking pigmentation. The very dedicated fans were decked out in all kinds of angel wings and fairy lights which was delightful. I was, however, not taking photos, lest I be mistaken for a child pornographer in training.

Attached to each seat when we arrived was a bracelet. In the age of chip-and-digital-everything, you will not be surprised to learn that the bracelets were programmed to accompany Taylor’s performance and so would change colours in unison, without notice! We had a seat with optimum views of the audience, if not the stage, which, in this case was brilliant. We could look out into the sea of lights and colour while watching the performances. It was very, very fun. At the end I told our daughter, “you might have invited a friend whose company you would have enjoyed more, but you could not have invited anyone who would have enjoyed the concert and being with you more.” 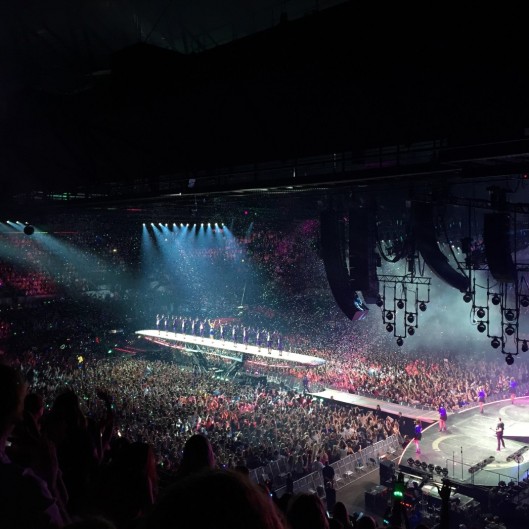 How often does a 27 year old daughter invite you to a concert?

Friday night of the same week, and the original reason we were flying to Adelaide, was to enjoy our Christmas present tickets from our daughter—to see Hugh Jackman’s show. It could not have been more different than Taylor Swift, hers being a concert of music and spectacle, Hugh’s being more like a broadway show.

Nor could our seats have been more different.

Just in case you missed him…HUGH! 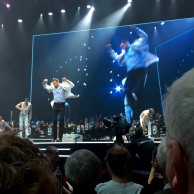 We were four rows from the front. And our daughter’s seat was next to the stage extension used by the cast and, of course, Wolverine himself, and his very fine glutes! At the end of the show he moved the length of the runway and ‘high fived’ everyone who held out their hand. Allison can never wash her hand again, now.

And just to remind us who is still in charge of Life, the Powers that Be arranged a soccer match on the same night so that the Entertainment Centre parking was full. As was every side street and neighbourhood for over a kilometre away. Our darling daughter dropped us off and then went on her own to park the car. In high heels, she hoofed it back to the show, only temporarily missing her sense of humour, which Hugh reinstated rather quickly. After the show we all hoofed it for nearly half an hour through dimly lighted streets, using our phones to light the footpath so Allison didn’t fall.

It was worth it.

For a few days the ennui lifted, and forever I will remember those very special experiences, as well as two days puppy sitting the grand puppy and visiting with our darling girl who I miss very much. It was the gift of a lifetime.

15 thoughts on “the gift of a lifetime…”