And what was not possible all too easily becomes the story of our lives. Indeed, our lived lives might become a protracted mourning for, or an endless tantrum about, the lives we were unable to live. But the exemptions we suffer, whether forced or chosen, make us who we are. –Maria Popova, Brainpickings

Perhaps, we are partly what we never were able to be, but I believe we are also that which we have found was not what we wanted. And then there is synchronicity –that which was meant to be. 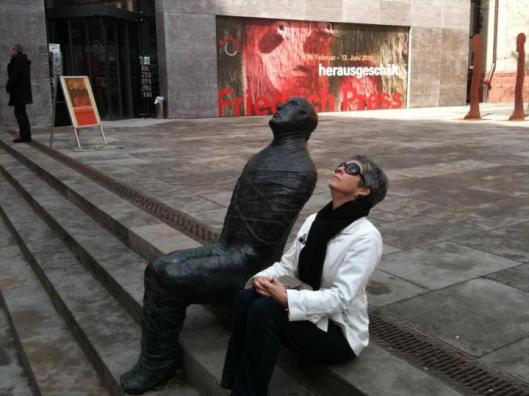 Even 40 years ago when I graduated from University, most of us were ill prepared to enter the work force. We had to jag a lucky break or someone to mentor us. I had tried to answer ads and arrange interviews but no one was really hiring a freshly churned out Fine Arts graduate. There was a fellow who had done some design work for my Parents’ business a couple of years before. He said to me, if I ever needed any help, to contact him. It was pretty clear I needed help. Having no idea what he meant by the offer, I decided to find out.

He saw me immediately and told me straight up, he had no position open–but he had a spare drafting table and if I wanted to come to his office every day, just like a job, he would teach me what he could. In return, if he had a few scraps of work he would send it my way, not for pay, but for the experience. Who in their right mind would answer such a non-job advertisement? But, I was so excited to work in a real studio and for someone willing to teach me, I accepted without hesitation. It was nearly a three quarter hour commute, each way, and I had no car yet (no job, no money) and no public transport. However, my supportive parents let me use one of their cars some days, and other days I got a ride with a friend who worked at a radio station nearby.

Over a period of several months I appeared each day in his office and tried to soak up what he had time to teach me. He was very generous. One of the things he taught me was how to use type. He helped me see that even though a picture may be worth a thousand words, we seldom see a picture in the advertising world, that isn’t coupled with words, even if it’s just the company’s name who paid for the ad. Those words are important, both in what they say, and how they say it visually. Unaware, the reader could be impacted by the actual typeface that was used. You may have heard of typeface names like Helvetica and Times, two of the most common, but there are hundreds of others.

Some days my focus would shift to seeking further interviews in hopes a paying job might eventuate. My friend who worked at the radio station was in the same building as the ‘sister’ TV station in Cincinnati. We both still lived 45 minutes east of the city with our parents. She asked the artist at the TV station if he would just talk to me and perhaps give me any tips he might have. The interview was arranged and my friend and I were going to have lunch afterward. His office was in the lower level of the building, in a rather creepy corner near the news cameramen’s workbench. But of course, to me it looked exciting–the ‘nitty gritty’ of a TV station–oooo. The following week the artist was in the middle of showing me some of his work and telling me what a dull and thankless job it really was, and being generally discouraging, when his phone rang.

He answered and then turned to me and said “The call is for you”. Huh?

When I took the receiver, it was my friend who had arranged the interview saying to me “Get out of there now, meet me in the lobby. Tell him your Mother is ill or something, just meet me in the lobby”. It was all very cloak and dagger in my naive experience and so I packed my portfolio quickly and thanked the man, mumbling something about my mother being taken ill, and beat a hasty retreat.

Once in the lobby she said, come with me, there’s someone you need to meet. She explained she was just talking to ‘a new guy’, telling him I was there meeting the artist. He told her to get me away from the artist, and upstairs to see him as soon as she could. She took me to the executive offices and introduced me to a charismatic man who then explained to me he was the new Creative Services Manager and wanted to have a look at my portfolio. He picked up each piece and talked to me about my education and other life experiences, particularly about the previous summer studying in Italy, and my recent work experience. And then he held up a card he had been carrying that had on it a single typewritten word. He asked me “What type face is this?”

After careful analysis I said “Helvetica”.

“Helvetica Bold, to be exact” he said, “but that’s close enough”. It was the icing on the cake of that interview, he later told me. He wouldn’t have hired me if I didn’t know anything about type, because in those days much of that job had to do with using type to create camera cards and ads. Now, it is all done with a computer. The cloak and dagger tactics were used because the artist I was talking to was about to get the sack, and I was hired to take his job!! It turned out the guy was as creepy as the location of his workspace, and had a bad attitude for learning the new methods I was eager to learn. I was the Graphic Artist, promoted to Art Director for several years, becoming the Creative Services Manager when my mentor moved on, four years after hiring me.

That fateful day after the interview, I had gone back to the artist’s studio to pick up my materials and tell him I’d gotten a job, and that his teaching me the typefaces had proved invaluable. I asked him how I could ever thank him? He told me he had made that same offer to dozens of students over the years but I was the only one to have ever accepted. (Maybe I was the only one desperate enough!) And then he said, ‘just help someone else someday, that will be thanks enough’.

Years later, at a TV station in Florida, I was able to pay it forward in a couple of ways…one was to an aspiring young artist I hired for a summer. The other, when I hired the woman who later became the wife of the Creative Services Manager who originally hired me. Meant to be.

25 thoughts on “that which was meant to be…”