I’m giving you a break from travel talk because I’m so tickled with a recent development here at Chateau ‘Z’. While we were away, a kangaroo adopted us! We see mobs (that is what a group is called) of kangaroo all the time, but we’ve never had a particular one visit us so consistently. He’s been around the neighbourhood for a while but lately he has decided the patch of gazanias I’ve left growing for kangaroos to eat during lean times, and the water bowl I keep full, suit him quite well. He isn’t here every day, but regularly makes an appearance. The tip of his tail is damaged, which easily identifies him but doesn’t seem to slow him down. I love watching him take off at a fast clip. They move with such grace, and agility, and in a way that is unlike any other animal. My friend tells me that often the older males get booted out of the mob and live on their own, like this one seems to be.

Using our breezeway as a thoroughfare.

I’ve been sneaking around with my iPhone taking photos for you. The above shot was taken through the vertical blinds. He would never let me get this close to him normally.

He drank for a long time at the bowl of water, probably 8-10 minutes the other day, then he hopped onto the golf course and nibbled grass for half an hour or so.

At the water bowl.

Taking a break from grazing.

Later on I went to empty scraps into the compost bin (foreground of the photo, sorry!) only to discover him about to make himself comfortable for an afternoon snooze. I tippy-toed back into the house, still carrying the scraps, and exchanged them for my iPhone. I tippy-toed out again and carefully sneaked the phone around the corner of the studio in hopes he would not notice it. He appeared to be about to rest, and then a minute later, I got a shot of him in full resting position. 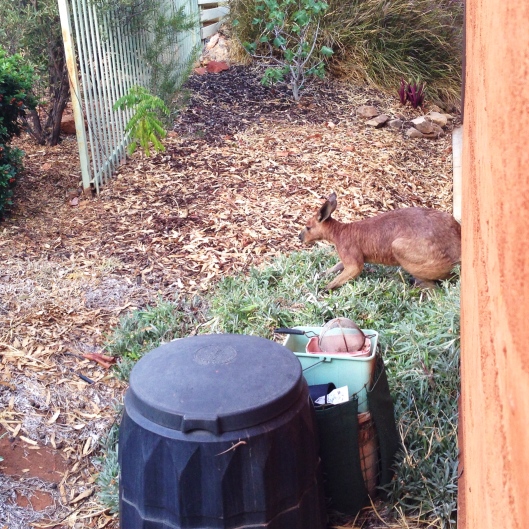 Getting ready to rest.

It is such fun to have the privilege to watch him close up. I hope he continues to visit us regularly, but he is a wild animal adapting to an urban environment, and anything can happen. Do you think we should name him or is that tempting Fate?? Leave a suggestion if you do, and if he continues to visit we’ll give him a moniker!