We have eyes to see, of course.  But what do we see?  As I was going through the grocery store this morning I could see that some of the veggies were a bit passed their prime.  I could see the ‘use by’ date on the dairy products, that there was no fish I particularly fancied, which of the sun-dried tomatoes looked best to me.  I could see the potential danger in the display that hung out in the aisle a little too far, as well as the young woman stocking the shelves, who smiled at me.

It’s true I could have ascertained most of these things if I was blind, or had no eyes.  I could use my other senses, or ask someone to help.  But I would have missed the woman’s smile, regardless.

A few weeks ago my dear 86 year old Mother was recovering from her second eye surgery in four months.  She has glaucoma, a disease that runs in our family. She had been told more than a year previously that the condition was worsening and she would need to consider eye surgery, if she was to retain her vision.  At the time she was caring for our Dad and couldn’t even contemplate the ‘down time’ to have the surgery, nor was it quite called for yet.  But soon after he died, she was told there was no time to waste.  The pressure in her eyes had soared and the doctor said the only option was the surgery.  Imagine, in her grief and fragile state of mind, what it was like to contemplate surgery on her eyes… the windows on her radically changed world.

At first she actually wavered about putting herself through what she knew would be yet another difficult challenge.  And then, suddenly, she changed her mind and decided to go ahead.  The first surgery went fine but the recovery was more difficult than she anticipated.  Three months on and the doctor pronounced her well, and scheduled the surgery for the second eye.  As she was recovering from it, a less invasive procedure than the first one, she wrote me an email (a feat in itself, only a few days out from the surgery).  It was short, but said so much…  “I got this surgery so I could see you when I tell you I love you.”

If there is a better reason for us having eyes, I don’t know it. 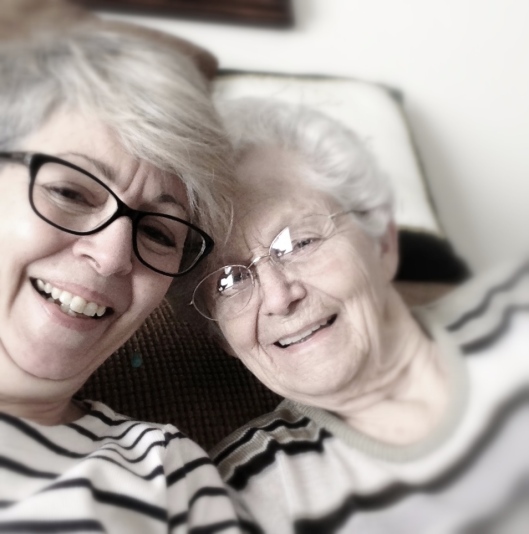 Mum and I learning to use her new iPad.