I received my Bachelor of Fine Arts degree 38 years ago from Oxford… Miami University in Oxford, Ohio, that is. So it has been with great curiosity that I have come to the original Oxford. It is so named because oxen were used to pull loads across a low point of the Thames and ‘ford’ the river in this place, hundreds of years ago… ‘Oxenford’. And when I say hundreds, I mean over 800! Originally there was a Benedictine order here, mostly for the study of divinity and law. The first graduate was a monk in 1298. Humbling, isn’t it?

If one begins to reminisce very romantically about school or college days, may I suggest a brief stay in college housing from about the 1960’s to put some perspective back into the picture? Yesterday we made our way from Wales to Oxford, where my husband had been invited to present a paper based upon his recently finished doctoral thesis. We agreed to stay in Worcester college accommodation so he could be close to the conference venue and I would be close to the city and tourist destinations.

We dropped the car at the rental agency and once again we dragged our suitcases about five blocks to Worcester college… did the 60/60 check again (see previous post re: ’60/60 check’–link function is not working for me today), the old girl was struggling a bit with humidity and stairs. The entrance to the college was much like I was feeling at that exact moment, had been around a while but was holding its own. However, when we got inside the grounds I was besotted. The misty rain and grey skies had finally cleared so that the summer sun shone off, to great advantage, the English gardens and perfectly manicured lawn (which we were told ‘receives many hours of attention from gardeners; they are, therefore, to be admired rather than walked on’). That they were labour intensive, I had no doubt, for they were works of art and I had the relaxed pleasure of waiting with our cases and enjoying the main quad while Don was endowed with our keys, cards, and college instructions.

Our room was in a remote corner of the college accommodation, which was not a burdensome walk, even with suitcases, considering what we had just done. When we left the charm of the main quad, presumably the oldest buildings, we were immediately amongst the mid-20th century offerings which were not nearly so enchanting. As it turned out, however, they had something in common with their predecessors… the plumbing. It took the first 18 or so hours to figure out how our toilet was supposed to flush, but the shower was more straight forward, if not very level, so that it held water from one day to the next. And then there was the hot water tap that I was simply not strong enough to turn off, and if Don put some grunt behind turning it off, I could not turn it on again. We used the downstairs loo across the courtyard and near the laundry to avoid ‘undesirable consequences’ while we tried to unlock the secret of the never-flushing-loo. If ever I wax too lyrical about the joys of travel, will you remind me of this, please? The secret to the flush, in case you are ever in similar circumstances, was to lean heavily forward on the handle and with considerable assertiveness, push down, forcefully, and HOLD…2..3..4.. or until something happened! It was by total accident I discovered this, and it is times like this I marvel at the human capacity to improvise and adapt.

I must tell you, though, despite our challenge with the loo, in general, English public toilets are amazingly clean and available. I can’t think of another country that provides such good toilet facilities for travellers or the general public. High praise coming from someone who has had to sit, squat and hover on many a questionable toilet around the world, if I could even find one!

The college room held two single beds, which we have learned in recent years is preferable for a good night’s sleep,to a very bad double bed that dips in the middle so that you roll together all night long (newly weds excepted). There was a desk and study chair and two sitting chairs as well as a tiny bar fridge and a small built in wardrobe. Adequate but not salubrious, which, if I am honest, was about the standard of my first room at University, minus the personal fridge and bathroom. We had ‘gang showers’ and toilet cubicles that were prone to all sorts of pranks played by drunken freshman girls! Nuf said.

I confess that I was somewhat less than gracious those first few hours after arriving, and discovering we had no wireless internet except outside in the courtyard of the old ‘Buttery’, several minutes’ walk from the room. It was a charming location but nowhere near adequate for my blogging needs, or even at times for email. And to be fair, we had just left one of the most beautiful B & B’s I’ve ever stayed in, to come to a place with a non-useable loo, and I was seriously tired, and the city was seriously crowded. Where was my adventurous spirit, just when I needed it? Things were likely to look better after a night’s sleep. And never underestimate the therapeutic value of cider and a piece of homemade pecan pie and ice cream for dinner!

By the next morning, after finding a good cup of coffee, a cafe with wifi, and breakfasting in the Hall with other collegiate occupants, I’d regained my equilibrium. As my friend Joanna tweeted me, ‘plan C’ shall be ‘triumph through adversity’! Ah, yes, it brought back memories of those first awkward days and weeks at Uni all those years ago. Learning a new environment is not easy, but a good exercise, nevertheless. 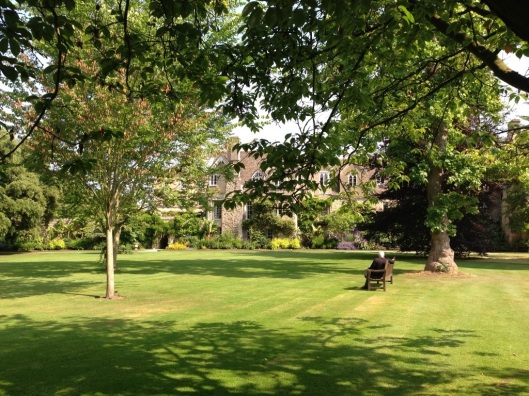 3 thoughts on “Back to Oxford for the first time”