On my recent return trip from the USA I was travelling alone.  So I had plenty of time to observe and muse about the ironies happening along the way.  As I left Greater Cincinnati airport, which is, by the way, in Kentucky, and not Ohio, where Cincinnati is located, I approached the TSA area to go through airport security. The first sign informed me I was entering the security area.  The second sign posted along the walkway of the security area stated it was not an area that required the removal of jackets and shoes.  Bless.  It was winter and I was glad for the small mercy.  However, only six or eight steps further along the way a sign read “please remove jackets and shoes for security”.  Ok so my moment of relief was extremely short lived.  And in the end, as we went through the security check, TSA agents told us to remove our jackets but NOT our shoes.  A little something for everyone! Maybe these mixed messages were purposeful to confuse the bad guys, I don’t know.  It sure as hell confused the rest of us.

After 16 hours flying, we arrived in Brisbane. We had to transit through Brisbane to Sydney due to a fuel stop. We had to clear security again, even though all we did was get off of the same plane and back onto it again after they had refuelled.  We were not allowed into the airport at large, only through a hallway leading to security and passed a single coffee kiosk adjacent to the gate area.  In that instance we all heard a woman tell us to take our mobile phones out of our bags, and having meekly and sleepily complied, were immediately surprised to have her sternly tell us to put them back into our bags!  Good grief is there no end to the situations about which we seem to understand nothing?

In desperate need of a good cup of coffee I stood on the queue at the coffee kiosk, along with other desperadoes from our flight, to get a cup of our addiction. We gathered afterward at the gate for re-boarding, anticipating sipping and relaxing when back on board the aircraft.  But wait… it seems you are not allowed to take hot beverages on board the aircraft, so we quickly consumed them before boarding…. Except for the flight attendant sitting right beside me who took his cup of the very same hot beverage on board with him!  Excuse me?

Well, that’s life.  Confusion reigns.  We have little control over our environment but we can choose to shrug, see the irony and laugh at ourselves.  At least the morning scene in Brisbane was unambiguously gorgeous! 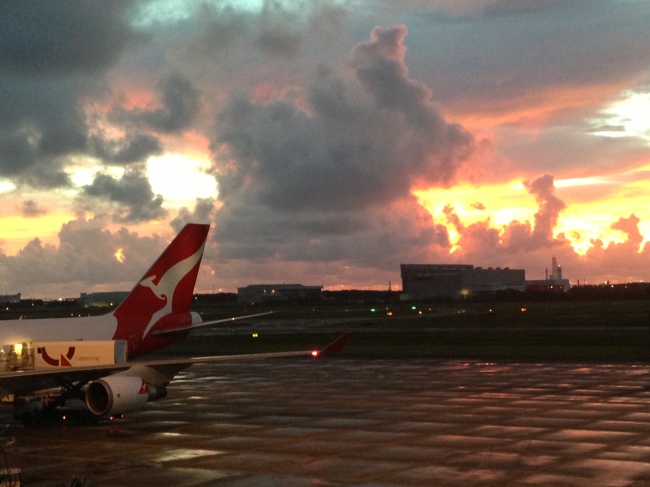