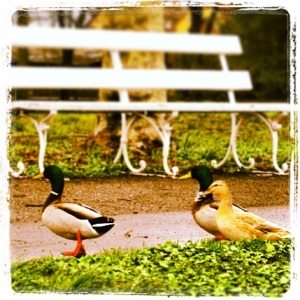 Two ducks are skimming placidly along the surface of a lake.  Suddenly for no apparent reason they seem to have a disagreement.  Perhaps one got a bit of plankton the other wanted, it doesn’t matter.  They have their little spat and at the end they distance themselves and flap their wings as if they are about to take off, but they don’t.  They lift themselves up with vigorous flapping in a great surge of energy, and then settle onto the water’s surface again, paddling quietly away as if nothing ever happened.

I have paraphrased this from Eckhart Tolle’s book The Power of Now.  Yesterday was the first day of a new year and, as one does, I reviewed some of the events and conversations of the year passed.  Among my thoughts was some advice I had recently given to someone dear to me.  It has become a favourite analogy, partly because it shows what wisdom we can observe in nature, and partly because it gives me a vivid picture to recall when the wisdom is needed.

As Tolle explains when he uses this analogy, the ducks have their disagreement, rid themselves of their excess energy, and resume their placid journey along the water’s surface once again. This can be us in life… if we allow it.  We can rid ourselves of the excessive energy heaped upon us, or which we generate toward others, and continue on with our lives in relative peace and greater wisdom.  We can make the choice to carry a grudge or we can choose to learn from the experience and move on. Carry the knowledge but not the excess emotional baggage.

Take a deep breath and release it slowly, blowing out with it that which you want to release.  Go for a walk… even if it is just to the tearoom to make a cup of tea and be with yourself.  Let it go.  None of us is perfect and at first it will be a difficult practice to use every time. But as much as possible, be a duck.  Let the passed transgressions live in the past where they cannot hurt you.  This year, take back the Present, dwell in it, and make it your gift to yourself.