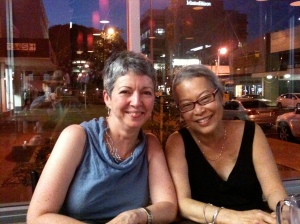 Ivy was my friend before we ever even met.  I was still living in the USA nearly 30 years ago when Don and I were to be married.  I wanted a particular Chinese symbol to use on our wedding invitations and Don, who was living in Australia, mentioned it to Ivy, with whom he worked at the time.  Ivy, who would do anything she could to help someone, especially a friend, found a Chinese calligrapher to paint the symbol on a piece of paper and Don mailed it to me and I used it for the invitations.

I can still remember my first morning in Australia.  It was early and here came Ivy and Gary, calling on us to see the newly wedded couple, Gary cracking semi-intelligible jokes and Ivy laughing all the way, and telling him to be quiet.  It was an instant friendship that has endured through the many ups and downs of life.  Ivy’s charm was her ease of laughter coupled with her absolute strength of character.  Her Christian values were lived out before us all, especially in recent years when it would have been easy to lose faith.

Anyone who knows Ivy knows how much she loved food. It made perfect sense to both of us that we would be talking about what we’d make for dinner, as we ate our lunch!!  Ivy taught me to cook Chinese style food, an enduring gift, which I use to this day.  During my recent stay in Darwin while having radiation therapy, and while gravely ill herself, Ivy still made sure I had at least a couple of meals a week with their family, a vitally important part of her life.  She had worked very hard and endured what most of us would not, to have her family.  She did the hard stuff.   There was little I could do to argue with her about it, or to repay her, except with my gratitude and love.  She knew that was the most important gift anyway.  I am quietly outraged that we have to lose her and, she, all of us.  But her passing means an end to the pain which she bore so stoically and for that I am grateful.

The Chinese symbol Ivy had painted for our invitations was the symbol for ‘Love’.  Here’s to you, Ivy, Gary, Miranda and Danielle, lots and lots of love. 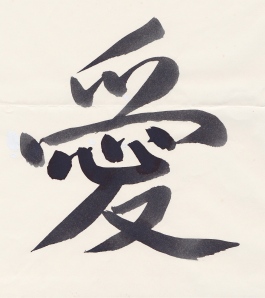