Years from now, those of us who are still living in Central Australia will be sagely commenting ‘Remember that horrible heat in the summer of 2018?’

My view of the rain relief approaching.

‘Remember how it finished with a huge weather system from the northeast, slowly turning the skies grey and blanketing the earth with reviving rains and cooler breezes?’ ‘Why, I remember the mountain, cloaked in clouds and heavy mist, disappearing for nearly two days.’

And so it happened.

I know friends and family tired of me writing ‘it’s been another stinking hot day’ and ‘I am so tired, the heat just drains me’. But damn it, I was right!! It turns out during the three months of summer (Dec 1 to Feb 28) we had record breaking heat. Instead of the usual average of 13 days of 40+ (104+F) temps, we had 39. Thirty-nine. And for those keeping records we learned the average daily temps for those three months was 38.2 (100F)…the hottest summer in 76 years of keeping records.

And this morning, 12 March, it was a crisp, cool 16c (60F). The air is clean, the colours intense and the arid lands at their best, refreshed by rain. Nearly…probably…almost worth the journey to get here.

Somewhere in the middle of the heat waves shimmering up from the ground, our bearded dragon departed. I wonder now if it was even too hot for her and she flung herself into the path of a four wheeled dragon slayer, flying around the bend near our place. Near the spot where our lovely dog met his doom seven years ago.

I was returning from my morning walk and there, in the middle of the road lay an unnaturally flat bearded dragon, the size and colour of Bernie. There is a funny Australian colloquialism ‘flat out like a lizard drinking’, which alludes to being very busy. I’ve never seen a lizard drinking, but presumably one must go very flat to reach the water and it is very busy thereafter getting some water into it. This was no drinking lizard, in reality, or metaphorically. Just flat.

I waited a few weeks to see if perhaps it was another local bearded dragon that had succumbed to the urban beast. We’ve had a few in the area. But there has been not the slightest sign of Bernie. I decided to posthumously give her a unisex name in deference to the possibility that I am wrong about her sex. The naming makes her memory more specific. To me. (Bernie is short for Bernadette…or Bernard should he/she reappear wearing boxers or something…)

a change of scenery from the rosemary bush

I missed Bernie a surprising amount and was quite sad at this turn of events. Her silhouette no longer quietly adorned the Callistemon tree, nor did her head peek out of the rosemary bush. She no longer scampered around the patio to seek cover under the Singapore Daisy vines. So…with my still developing skills, I decided to honour Bernie. After a bit of sketching, and with some artistic license, I had a sort of caricature that I was happy with. But I couldn’t quite figure out how to create a texture for the skin that I liked. After a frustrating session at the drawing board one day, I decided to get completely away from the project and turned on the television. The Antiques Road Show was on and within a minute or two there appeared an antique lamp, in the shape of a dragon, that made me sit up in stunned acknowledgement. There was the texture I needed for Bernie. Back to the drawing board I went. Literally.

It made me realise that I enjoy the mental gymnastics of solving drawing problems, as much as the actual drawing. Often I will leave a piece for days, even weeks, as I turn over in my mind various objectives and options. It is so much more interesting to contemplate than what I’m making for dinner. It is not unlike writing this blog in that way. Even though I have written few in recent weeks, I’m constantly turning over ideas and writing bits and pieces, taking photos and auditioning scenarios about which to write. Bernie is worthy.

Vale Bernie, Bearded Dragon of the Fairway. It has a certain ring to it.

Recent discovery as told to me by my Optometrist: When eyes feel tired and dry, wet a face washer (washcloth) with very warm water and gently rub the eyelids, upper and lower, for about a minute. It is surprisingly restorative. Apparently it unclogs oil glands on the edges of the lids and thus enables more moisture to be kept on the eye, making it less dry and uncomfortable.

For a few moments I melded with the sunlit rocky outcrop reflected in the glass. It was peaceful there without my mind unraveling its usual tale of woe.

Heart is wrenched at the thought of the old man who looked like my father, shuffling along in front of me a few days ago. As time goes I somehow miss him more. I thought it would all fade as the years passed.

There are lizards in my life. As a personal animal totem–not necessarily mine, but maybe… a lizard can symbolise repetition of cycles. It can also mean a person is extremely good at facing their own fears and moving between realities and alternate existences. How does one know what is reality and what is otherworldly? Both can seem so real and yet so preposterous.

Our bearded dragon sits patiently in the tree near the patio, waiting for his lunch to crawl or fly past. Take away, fast food. Or sometimes he sits in the top of the rosemary bush, doing much the same, but the scenery is different. Now and then he trots out onto the golf course, a hundred feet or so in front of the house, and he sits. Frozen in the heat. Occasionally he raises a leg and holds it in the air, as if uncertain of his next move. Or he bobs his head up and down–now what is that about? Makes me smile.

a view of the mountain and perchance a snack?

a change of scenery from the rosemary bush

The pygmy goannas rent a holiday space in the rafters above the insulation in our house. They come and go and, except for years of mice in plague proportions, keep the house fairly rodent-free. Hearing the occasional scuffle in the ceiling is more reassuring than worrying. They sometimes peer at me through stored pots in the corner of the courtyard beside the clothesline. Is she friend or foe? I turn to hang a pillowcase, hear a soft sliding sound and look back in time to see a long dark tail disappearing into the roof space. Very occasionally I see them out and about, crawling through the courtyard, stopping frequently in case a snack is nearby. Once, in winter, I discovered them sunning on the side of the studio. Am guessing the rammed earth walls are very user friendly for their claws. They have been around this property since we moved here 20 years ago, and probably before that. 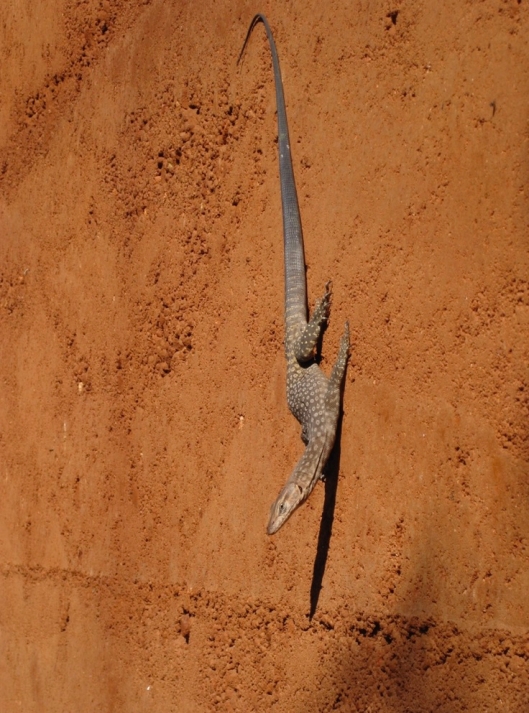 Geckos are ubiquitous. They party at night when we are asleep, feasting on a banquet of mosquitoes, moths and insects, if the copious droppings are anything to go by. Our geckos almost never die in the house, thank goodness, but they love to shed their skins here. Every few months I find a gecko skin, nearly perfectly formed and left behind in the ledge of our bedroom window. The skins are translucent, soft and pliable. The window is always in dappled light, with leaf litter below and native bushes a few feet in front. It must seem a friendly space. I wonder what it feels like to not just metaphorically shed one’s skin?

off with the old…

The art of my life is when I see things that evoke feelings which I am able to access and turn into words or drawings. I wish for you, lizards and alternate realities and a muse who will help you spin them into gold.

When we bring what is within out into the world, miracles happen. ~ Henry David Thoreau