Perhaps you know the quote attributed to John Lennon: ‘Life is what happens while you are busy making other plans.’ It kind of explains why my break from blogging has been a bit longer than anticipated. Our time away was very good, but the small amount of spare time I had was used to relax, and I knew you wouldn’t mind! On our second day away I received a surprise invitation to something I had only recently even heard of, and never attended…an ‘Instameet’. 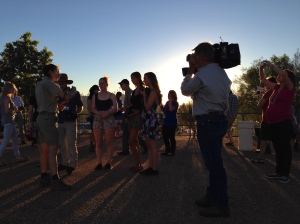 camera man and participants–it made the weekend ABC news!!

As you know, I am engaged in a 365photochallenge. It involves taking a photo each day and posting it on Instagram @amosthemagicdog. Many of my photos have been picked up, with permission, by some of the Northern Territory tourism Instagram and Twitter accounts, as have many photos of others here in Central Australia. Through the efforts of @NTOutbackAus an Instameet was organised here in Alice Springs. It was to thank those of us who contribute to promoting our love for the place in which we live. It was also a chance for us to meet each other, as well as a few professional photographers who travel the country contributing from everywhere.

The lads and their drone

The problem for me was the Instameet happened only about 5 hours after our plane was to land from our trip. As you know there are always many things to get back into place when arriving home from time away, groceries, unpacking, washing of clothes, etc. Part of me really wanted to go along to this unique opportunity, but the introvert in me, that person who hates crowds and gatherings, sat on my shoulder saying “you can get out of it, you have an excuse”… 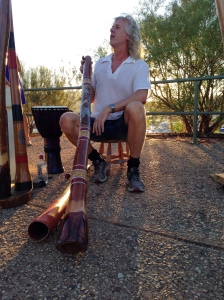 Andrew Langford takes a break from playing the didgeridoo

At 6pm atop Anzac Hill it was still very hot, 38C (100F) but I went along and found a bit of shade, and shook a few hands. Much to my surprise, some of the Instagram buddies, whose work I have enjoyed, were there and it was fun to meet them. Our hosts had provided local foods and some special guests from the local Desert Wildlife Park. In the background local performer, Andrew Langford, played the didgeridoo, which added to the very Central Australian feel of the event. People who happened along to view the sunset were intrigued, if not a little intimidated by the activities! There were even a couple of enterprising men with a drone! And then of course there were all those cameras! Who wouldn’t be a little intimidated? I’d guess about 20 or so photographers and contributors showed up, in addition to the Wildlife Park Rangers, the promotional people and other support staff. When will I learn these things are seldom as daunting as I imagine?

This, among other things, is part of the ‘adventure’ of my 365photochallenge.

(The day after the Instameet I came down with a heavy head cold which has kept me from the computer, but I have managed to struggle through the photo challenge. I will update you soon on that and our travels.)