‘There’s no better way to kill a bad product than with good advertising.’ When I worked in advertising that phrase was our way of reminding ourselves to stay true in what we said about our product, but also, to try our best to make sure the product was good in the first place. If we launched very clever, successful ads and people responded and bought the product, which turned out to be a dud, word would spread fast!

Every time I hear the phrase ‘In these uncertain times…’ I think ‘that is advertising a lie’. Humans have never lived in certain times. I doubt there even exists such a thing in a parallel universe! All that we know about life is, at best, that certain things may be likely to happen, or not. The only certainty that may possibly exist for us is in this moment. Not a nanosecond from now, or an hour from now, but now… oops… gone.

It is to our detriment that we buy into this well advertised concept, that somewhere out there, was, or might one day be, certain times. It is a bad product of faulty thinking.

Yesterday I was diagnosed with glaucoma, and partial sight loss in the lower portion of my visual field–both eyes. This was the third in a series of tests, so there is no doubt. For half the day I morphed through four of the five stages of grief and loss… denial… anger… bargaining and sadness. We’ve all been there.

I took the eye drops the doctor said for me to start ‘immediately’.

I went to bed. Stuck at sad.

This morning I woke, if not happy, at least aware of the many times in life I have been lucky. It was an unusually warm morning for the middle of winter, so I grabbed my camera to greet the sunrise. The amazing colours and cloud formations put everything into perspective again. The power of the thing that is bigger than us, more beautiful than artists can replicate, reassures me– restores me. All things are possible, and as they should be, if not always as they are advertised to be.

In the wise words of Bob Dylan…

“The Times They Are A-Changin'”

And admit that the waters

Around you have grown

And accept it that soon

You’ll be drenched to the bone

If your time to you

Then you better start swimmin’

Who prophesize with your pen

And keep your eyes wide

And don’t speak too soon

For the wheel’s still in spin

And there’s no tellin’ who

For the loser now

Will be later to win

Don’t stand in the doorway

Don’t block up the hall

For he that gets hurt

Will be he who has stalled

There’s a battle outside

And it is ragin’ 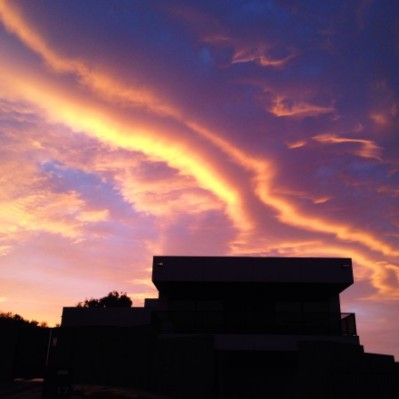 And rattle your walls

What you can’t understand

Your sons and your daughters

Are beyond your command

Your old road is

Please get out of the new one

If you can’t lend your hand

The line it is drawn

The curse it is cast

The slow one now

Will later be fast

As the present now

Will later be past

And the first one now

Will later be last

(I shot all these photos on my walk this morning, isn’t it incredible the spectrum of light, shadow and colour?)

15 thoughts on “In these uncertain times…”